It’s been a while since my last article, hasn’t it?

That’s because I was suffering from some pretty heavy depression and a lack of creativity in the majority of July. Social media contributed to my decaying mental health so I decided it was time to take a much-needed break. I did so for about a week and isolated myself, not really talking to anyone.

During that time, I did have suicidal thoughts and I was attempting to starve myself as a result. It’s my indirect way of punishing myself since cutting myself is a big no-go for me due to my sensitivity of pain.

However, I didn’t get far with this since my new parents figured out what I was doing. My new mom kindly asked that I eat something, to which I did. It’s not like I’ll lie to them either as I did with my old parents, as I’m usually honest.

Thankfully by now, my mood has continued to significantly improve after finding purpose in my life again. With that, I told my friends I’m coming back online and I’m able to work on my art and writing again.

My social media friends are highly supportive and look out for me a lot so I share most of the things in my life with them, thus which leads to a post I made discussing my self-harm in the last few days at that point in time. 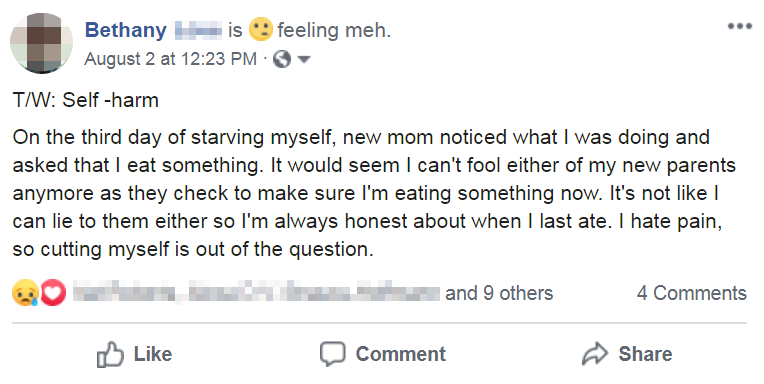 And guess what happened? Facebook hit me with a thirty-day ban. No posting anywhere nor messaging anyone.

As you will see, I followed the community guidelines to the letter regarding their terms of posts that mention suicide or self-injury. Let’s take a look at what Facebook has to say regarding self-harm content:

“6. Suicide and Self-Injury
In an effort to promote a safe environment on Facebook, we remove content that encourages suicide or self-injury, including certain graphic imagery and real-time depictions that experts tell us might lead others to engage in similar behavior. Self-injury is defined as the intentional and direct injuring of the body, including self-mutilation and eating disorders. We want Facebook to be a space where people can share their experiences, raise awareness about these issues, and seek support from one another, which is why we allow people to discuss suicide and self-injury.

We work with organizations around the world to provide assistance to people in distress. We also talk to experts in suicide and self-injury to help inform our policies and enforcement. For example, we have been advised by experts that we should not remove live videos of self-injury while there is an opportunity for loved ones and authorities to provide help or resources.

In contrast, we remove any content that identifies and negatively targets victims or survivors of self-injury or suicide seriously, humorously, or rhetorically.” 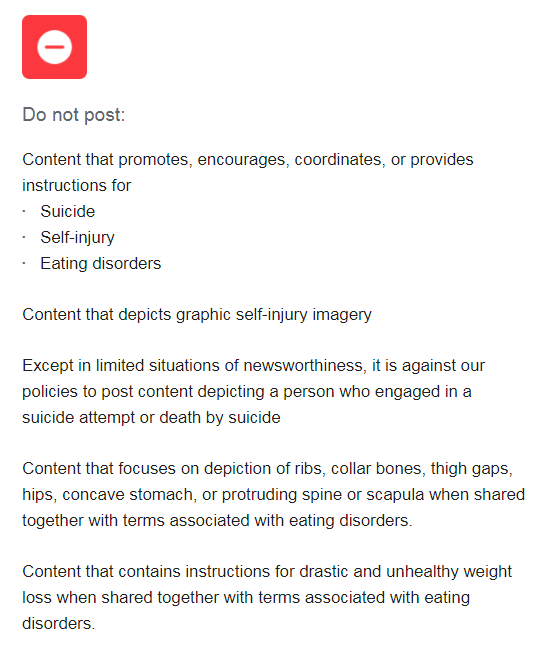 It was a short post informing my friends/followers on what happened during those last few days. I did not:

In fact, you can say that it perfectly fits the bill for their exceptions:

“We want Facebook to be a space where people can share their experiences, raise awareness about these issues, and seek support from one another, which is why we allow people to discuss suicide and self-injury.“

Facebook can’t even follow its own guidelines and then wants to discipline others for it? Get the f**k out of here.

But this has to be a mistake, right? Surely Facebook will undo my ban once I submit my post for review. 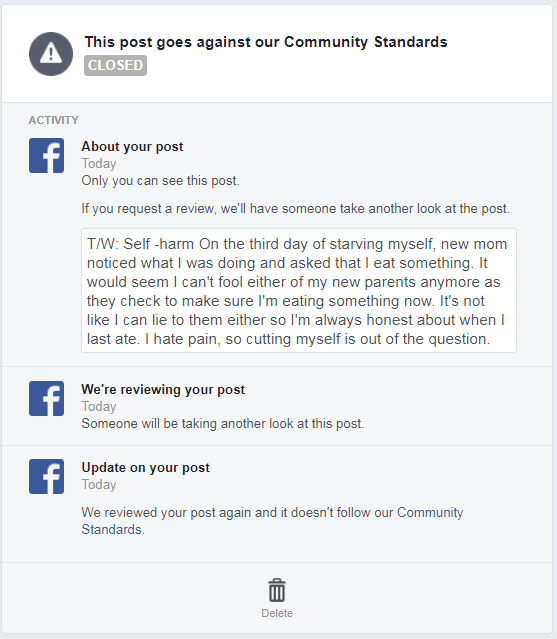 Even with the post being supposedly manually reviewed, Facebook staff still found it “unacceptable” and kept my ban.

Interestingly, the post is available again, but I still have been struck with the consequences of it.

To say I am infuriated would be an understatement of an understatement. A thirty-day ban was the last thing I needed since I update my friends frequently on my issues. Facebook is a crucial tool of social communication for me. With Facebook even banning my messenger privileges, their actions become even more grotesque.

And to them, this is their way of “helping” me with my mental health.

Now imagine if this had happened to someone who was even more emotionally unstable and was much closer to committing acts of self-harm. If you know your psychology and counselling, then you would know doing something as drastic as this would only increase the chances of a person self-harming or committing suicide, making what Facebook did something of high seriousness and consequence.

If this was a just an autonomous mistake, then I would be all for forgiving Facebook on an oversight like that, but the fact that someone in Facebook’s staff thought this was okay is a complete slap in the Facebook for anyone going through mental distress on the platform.

✿ Special thanks to Sophie Stormwind and ScarX_X for being my first patron and Jessa Hurty, Mike and someone for buying me my first coffees on Ko-Fi! ✿