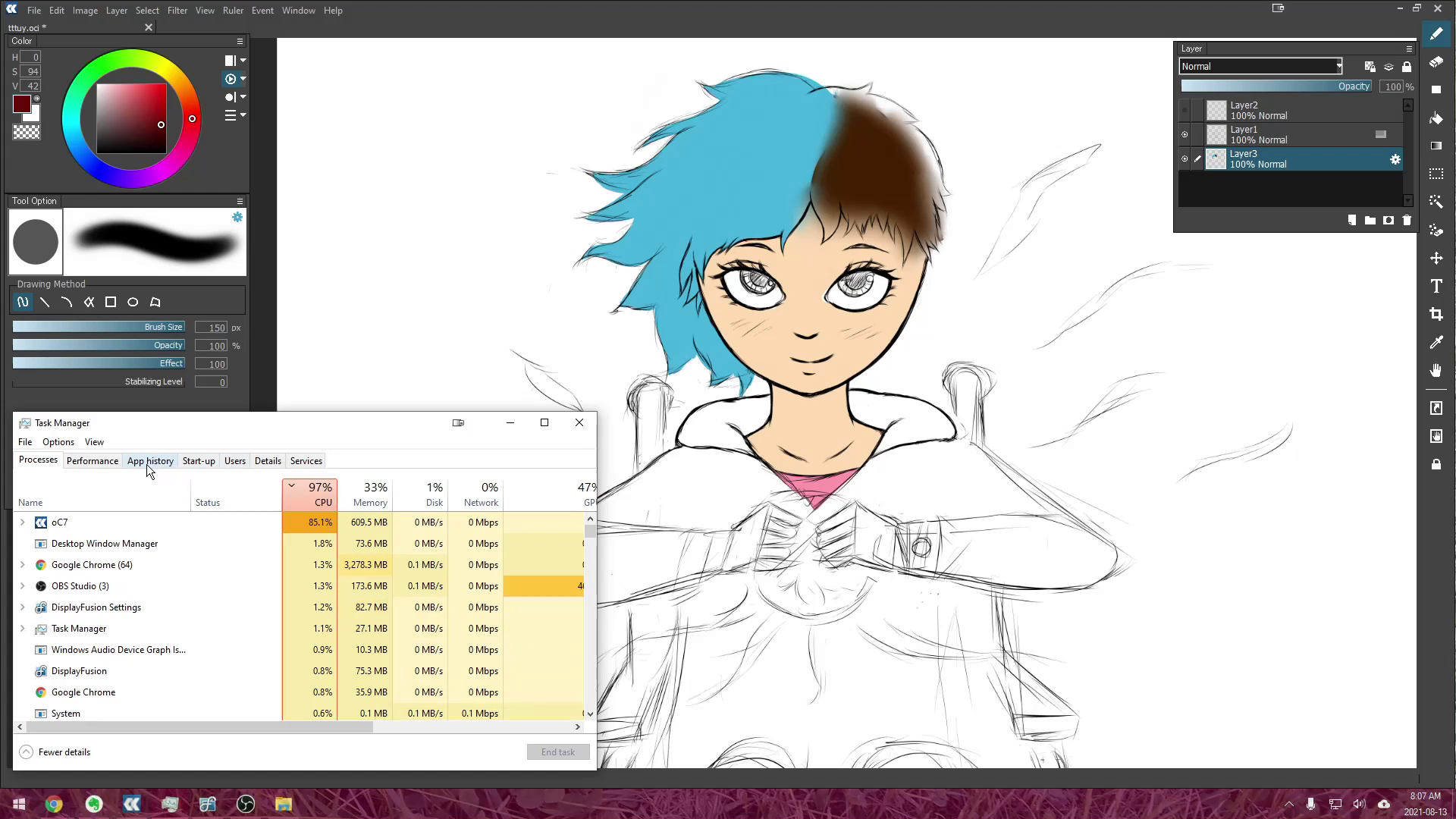 As an Illustrator, I can’t use OpenCanvas 7 anymore.

Two years. That’s almost how long it has been since OpenCanvas 7 received an update.

The last update it got was on October 15th, 2019. That is insane. No software should be going that long without an update. And it’s a program that desperately needs features and bug fixes to keep up with its much more well-equipped competition.

I have been dealing with the same bugs, if not more since I made my review on OpenCanvas 7 three years ago.

Workspaces not working correctly, one time a file got corrupted and I lost all of my work on a commission, and constant crashing and freezing within the program. (╯°□°）╯︵ ┻━┻

And where is the English Support Forums that they’ve apparently been working on since forever? I would say the most significant thing for OpenCanvas 7 that the developers added was a User Manual. And if you look at it, it’s for version 7.0.19 of the program, so the manual seemingly hasn’t been updated in almost three years as well.

But nothing, and I mean NOTHING, compares to the OpenCanvas 7 Blur Tool.

That f**king blur tool. You’re going to see why I’m going to dedicate an entire section to it.

Want to know the one infuriating bug PortalGraphics still has not fixed to this day? The blur tool in OpenCanvas 7. It consumes 100% of your CPU resources when you try to use the damn thing.

In fact, I had to develop a new style of colouring my artwork with its blur tool because of this bullshit.

As an artist who uses a semi-painting style to colour my work, the blur tool is vital for my illustrations. I actually tried once to not use the blur tool for the sake of OpenCanvas 7 and the resulting piece was terrible.

To try bypassing the issue, what I did was use pointillism as a way to reasonably use the blur tool. If I just tapped in dots on my tablet, OpenCanvas 7 would still use a bit of power, but because I did it within milliseconds, the CPU usage would go back down quickly. So I coloured my work with this style so the blur tool wouldn’t try to choke my CPU to death each and every time.

It worked pretty well for the time as I’ve been using OpenCanvas 7 as my primary drawing program for a few years. However, I realized I couldn’t rely on it anymore when I tried switching to my laptop.

Recently, I wanted to spend more time with my partner. I’m constantly in the office working away so I came up with the idea to use my Lenovo Thinkpad for my XP-Pen Artist 13.3 Pro Display Tablet while I’m on the couch with my partner. That way I can draw, be around them more and watch them game.

My partner bought the display tablet for my birthday and it’s still the single greatest thing I’ve ever received.

Since I was working on a big illustration piece for an organization, I was trying to put as many hours into finishing it as possible. I transferred the files over from the office computer and I was ready to go. But there was a problem, of course.

I was in the colouring phase of this illustration so I tried using the blur tool, but my Lenovo Thinkpad X240 couldn’t handle the CPU resources it was trying to draw. The program lagged and froze as a result. It was very frustrating and I didn’t get any work done.

I’m just like “Ugh, I need a stronger laptop”. I was considering using my partner’s laptop but my laptop is still marginally better than theirs.

But then a few days ago, it hit me: “Why do I have to get a beefy laptop just to use the blur tool function of an art program?” Even something as simple as just blurring one colour brings OpenCanvas to its knees. It was at that time I realized that OpenCanvas wasn’t going to work anymore for me as a professional drawing tool.

I know even the Japanese users of OpenCanvas 7 have stated the issue before [Forum Post #1; Forum Post #2]. People in the Steam forums are also unhappy. PortalGraphics suggests decreasing your settings in the application, but then you have to ask yourself: “Why do I have to use lower settings for this when I don’t have to do the same with other art programs?”

At the time of my review, they told me they were going to improve it with future updates.

And I know they’re still active. The website is still being maintained and their partnership with XP-Pen reflects that. It’s actually how I got a second copy of OpenCanvas 7. It was one of the free programs being offered with the purchase of an XP-Pen Artist Pro tablet.

I’m still waiting for the reply to my email, PGN Inc. I know you respond to my other emails whenever I submit error logs because of your constantly crashing program. 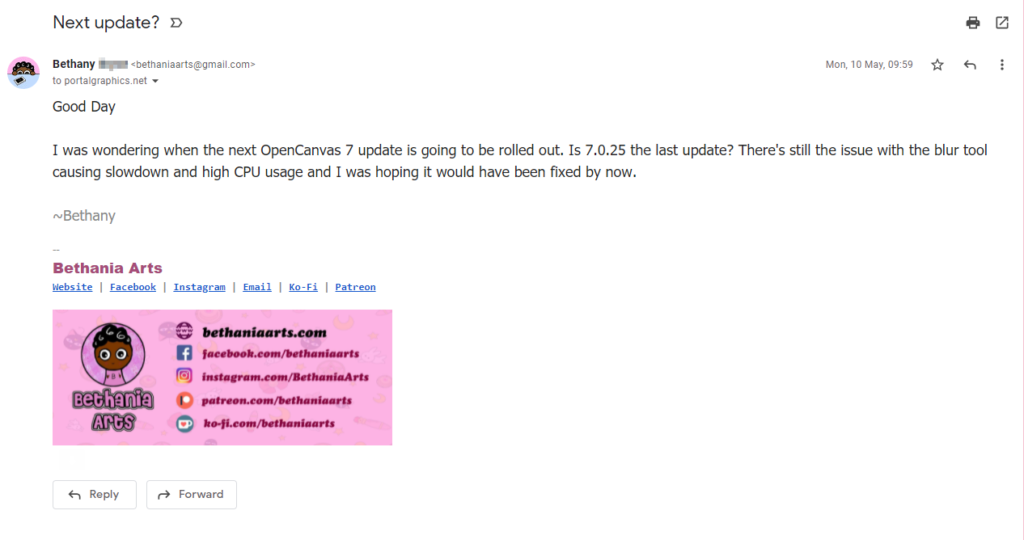 They can’t even use the COVID-19 pandemic as an excuse because 1) The last update was a couple of months before the pandemic in China happened, and 2) All they have to do is edit the code of the program. Any employee’s home computer should suffice.

I decided to record footage for this article for the sole purpose of showing you what OpenCanvas 7 users have to deal with. However, while I was editing the video, I showed it to my partner and they laughed their asses off at what they saw.

As said by my partner, who is a software engineer, when I showed them the resource monitor:

Regardless, no art program like this should be exhausting the resources of i7 CPUs. Actually, I would like anyone with a more recent CPU to tell me if they encounter the same problem. Quite honestly, I think the only computers strong enough to put up with OpenCanvas 7’s blur tool are modern server CPUs.

I was actually thinking of spending a day where my partner and I would fix the program ourselves and post the fix online for everyone. If it was open-source, that would be relatively easy to do. However, OpenCanvas isn’t open-source despite its name.

“Then why is it called OpenCanvas? lol” – My Partner

The Reason For Staying.

Now you’re probably asking yourself: Why have I been putting up with OpenCanvas 7’s shit? 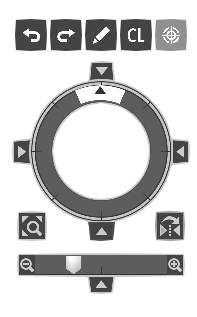 I said in my review that it’s a godsend of a feature and I still stand by that to this day.

It just makes drawing so much snappier and it has been amazing to use. I can rotate and zoom in with absolute ease and even flipping my art horizontally is super intuitive. I just didn’t want to say goodbye to it.

The hand tool is what kept me away from using Clip Studio Paint for the longest time. Well, that and this really frustrating problem I’ve had with CSP.

I had a problem twice where I couldn’t draw anything within Clip Studio Paint for some odd reason (and no, it’s not because I used the selection tool by accident). I wasn’t having the same problem in OpenCanvas so it was clearly a fault with CSP.

My partner did something the second time it happened and I could then use the program again, but I can’t remember what they did. But what I’m trying to say is, at least Clip Studio Paint’s problems are fixable.

Yeah, yeah, I know. This one is more of a personal inconvenience, but I do feel really proud that anyone can see my 1500 hours spent in OpenCanvas 7 on Steam.

Hi, CSP. I Guess We’ll Be Working Together Now.

When I finish my current art project, I’m going to be using Clip Studio Paint henceforth. I didn’t want to say au revoir to OpenCanvas7’s hand tool, but that is what it has come to.

For now, I’ve set up Clip Studio Paint to give me the closest feeling to using the OpenCanvas 7 hand tool. It seems to work but I’m going to have to spend more time with the software to get more comfortable with it. 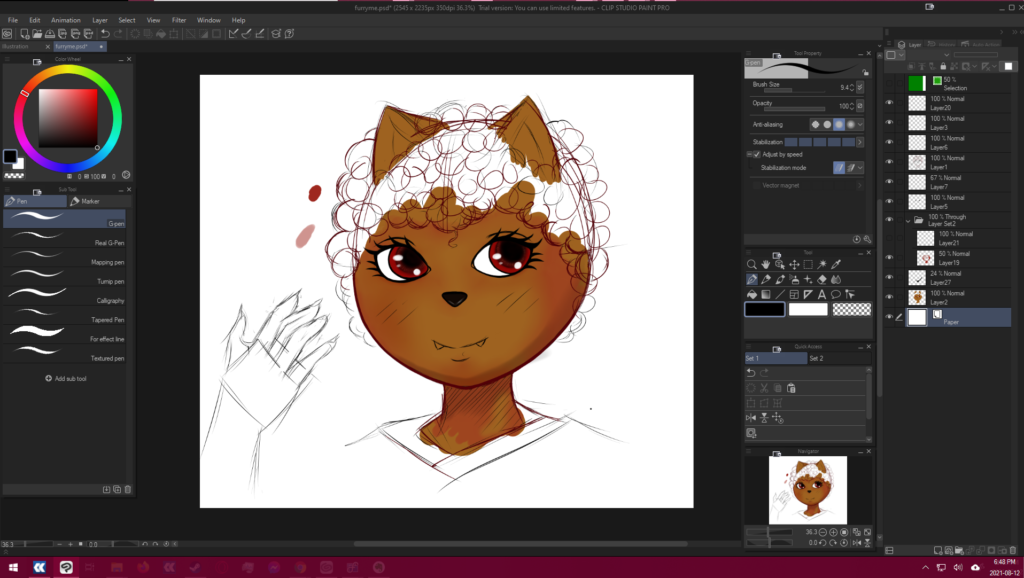 My plan is to pay for the Monthly Subscription Plan that lets you use Clip Studio Paint on two devices. I can’t afford to drop the $64 CAD for it right now, so I’m hoping for a sale or just saving up for it within the three free months they give me with the subscription.

Would you like to see me review Clip Studio Paint Pro? Let me know and I’ll compare it to OpenCanvas once more if you like.

Also, Celsys, I tried signing up for your affiliate program and it’s a real pain the ass to deal with. I have to provide a TIN (Taxpayer Identification Number), which I don’t have, along with other details to complete your multiple forms. For something where the benefit is just a small commission, I honestly rather not bother.

✿ Special thanks to Duna Haller and Natalie Kufel for supporting me through patreon! ✿

✿ Special thanks to my beloved Facebook friends and Rainbow Railroad who contributed in my time of desperate need to get to Canada! ✿

[…] Did you like my review? Why not leave a like or a comment, or maybe even share it with your friends. Update [13th of August, 2021]: I wrote a new article on my website regarding OpenCanvas 7: I Give Up. I’m Ditching OpenCanvas 7 For Clip Studio Paint. […]

I will never buy a software stuck to Steam. A software you buy should be independent of any external element. A professional artist needs software he can use all his life and Steam may be not live such a long time. And try Krita.