As a webcomic artist and illustrator, it’s perfect for me. But…

…it does come with significant downsides which I will discuss further in my points below. I’m going to try to be as informative as possible, so if you want to make a purchasing decision for OpenCanvas 7, I’m your girl. 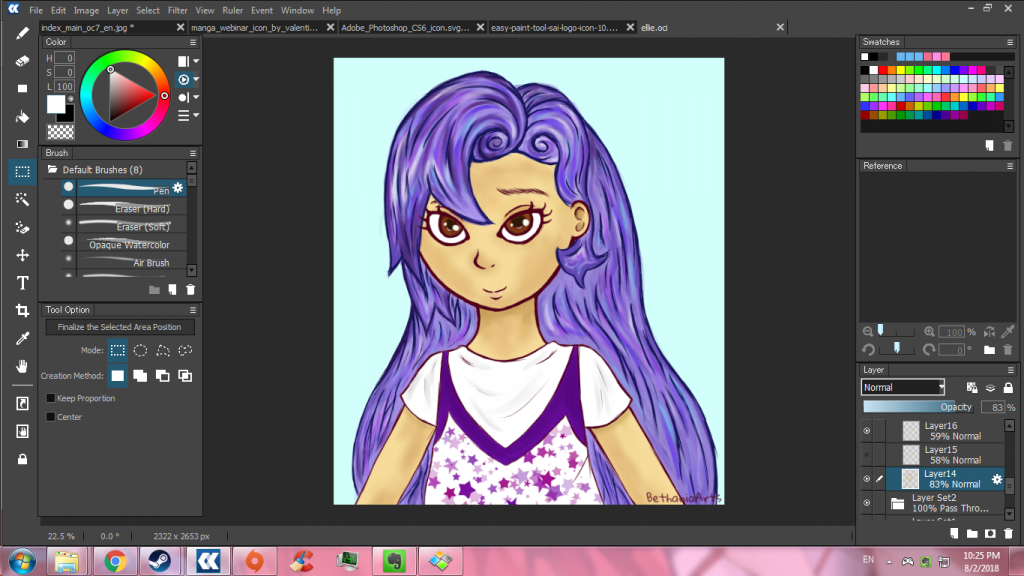 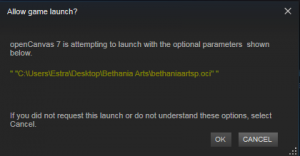 The biggest problem with OpenCanvas 7.

It’s expensive for what it offers (if you don’t happen to get it on sale) compared to its biggest competition: Clip Studio Paint. It all becomes clear when you see the “amount of features offered” to “price” ratio.

The standard retail price for Clip Studio Paint is $50 USD. OpenCanvas 7 is $60 USD. It gets worse when you realise that Clip Studio Paint offers a lot of features for anyone interested in manga/comic illustration and animation. So right there, Clip Studio offers tools for illustration, comic design and animation all in one bundle at a $10 USD lower cost than OpenCanvas 7. You can probably forgive the developers since the popularity of OpenCanvas pales in comparison to Clip Studio Paint, and seeing that people are likely to pirate software rather buy it (especially with how expensive art software is), I can reason with the price point a bit. But then the issue arises that PortalGraphics (the developer of OpenCanvas) offers a separate comic/manga illustration software called mdiapp+ SE that is priced at another $60. Judging from the lack of reviews, I don’t think it’s quite popular either. But to be fair, it does seem to be developed by different group credited as “nattou.org” and PortalGraphics is just the publisher.

Alright. Let’s sum it all up: PortalGraphics is offering two art programs bundled at $120 USD to do both illustration and comic creation, whereas Clip Studio Paint is just $50USD in comparison and it has animation tools. I haven’t even mentioned the EX version of Clip Studio Paint that is $219 USD that’s more for the industry professional illustrator. However to be fair, it is still very possible to make whatever comics/manga illustrations you want to do within OpenCanvas 7, only you’ll be doing it with less finesse than with a more dedicated program.

“Why did you buy OpenCanvas 7 instead of Clip Studio Paint?”.

Personally I would tell you if Clip Studio Paint is working great for you, then go with that. It offers a lot more at a cheaper price. I’m very content with OpenCanvas 7 and it works perfectly for what I need it to do. It’s a big improvement over using Paint Tool SAI.

Features I want to see added to OpenCanvas 7:

Did you like my review? Why not leave a like or a comment, or maybe even share it with your friends.
Update [13th of August, 2021]: I wrote a new article on my website regarding OpenCanvas 7:
I Give Up. I’m Ditching OpenCanvas 7 For Clip Studio Paint.

I hope you find it as informative as this older review I did.

I am an artist and writer from Barbados (residing in Canada) who's using her talents to create entertaining and informative content. I'm terrible at proofreading my work, so I apologize for any errors you find. o(TヘTo) You may contact me at bethaniaarts@gmail.com for any inquiries.
View all posts by Bethany Edelgard →
Subscribe
7 Comments
Most Voted
Newest Oldest
Inline Feedbacks
View all comments

I just cant seem to get into clip studio it seems so weird, but as soon as i picked up openCanvas 7 it felt like a long lost friend since i was a user of sai2 and fire alpaca XD OC is on sale rn…. hm….

Thanks for the review. It was very helpful. PaintTool SAI was absolutely one of the best programs for anime/manga style artwork. I’ve always used Paint Tool Sai for years and it worked perfectly with my XP-Pen Artist 12 Pro Display drawing tablet . The lines are beautiful and crisp with the pen and brush tools, while the blur and watercolor tools are to die for. It is lightweight compared to photoshop and i do personally like the pen brush pressure of Paint tool sai compared to PS. The brush pressure is much natural to me without tinkering lots of of… Read more »

Thank you for the very informative review for openCanvas 7. I was wondering about the diverences bewteen popular drawing programs and you just nailed it for me. I am an ex painter-drawer (if I coud say it this way) and want to return to painting software that are simple, fast, easy to use and does not use as much resource for my midrange pc setup.
I thin I will start out with openCanvas7, especially Steam (wich Im fan from too=] ) has it on sale now 04-05-2021. What do you think should I get it?

Thanks for reading my review! <3 If I'm being honest, while OpenCanvas is still a good program for me, it hasn't been updated since October 15th 2019. So if you have problems with it, the chances of there being fixes for it are low at the moment. I’m still experiencing the CPU resource “bug” when using the blur tool. Krita would be a better choice for someone wanting something simple, and its development is active. However, it’s still a program I’ve yet to use and review, so I can’t really attest to it besides what I’ve heard about it from… Read more »

[…] have been dealing with the same bugs, if not more since I made my review on OpenCanvas 7 three years […]

I like you review overall,I have a SERIOUS problem with Open Canvas’ Pencil tool. I had the choice of a free copyRage art or OpenCanvas7 after trying them out by downloading trial versions I picked OC7 only to find out I tested OC4.5+ and it was primarily how they handle the pencil too that made me pick it. The pencil on 4.5 is AMAZING it feels like an Analog pencil and it gets darker the harder you press and is very fast and responsive and on OC7 they though all that out the window it is slow and clunky as… Read more »