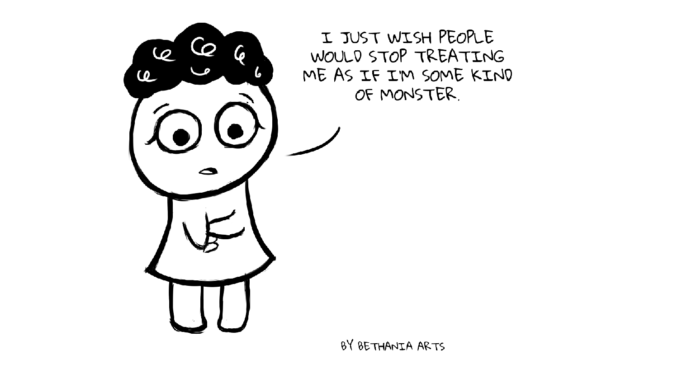 That’s a really tough question because I’ve never gotten to the point where I can confidently say that I do fight against discrimination (≧д≦ヾ). I am transgender. I identify as female, despite my sex assigned at birth.

I grew up in a household where my parents are very religious. Yes, it has been a disheartening experience. They take advantage of the fact that I’m quiet and don’t fight back against them, but recently, I’ve been able to stand with my head higher than ever. They would say something pretty homophobic and I either just don’t tolerate their need for attention or I confront them to let them know they’re in the wrong. Either way, they just ignore me. But despite all of that, there’s hope in my heart that they may some day come around and say “Hey, this is my daughter. They may not have become what I wanted for them, but I am still proud to be her parent”. I know, I know. You’re probably saying I’m naive and stupid. That I should probably grow up and stop dreaming a hopeless dream. Yes, you’re probably right. But at the end of the day, they’re my parents, aren’t they? Not yours. As the child of homophobic and racist parents, I feel obligated to try my best to dissuade my parents from their prejudices or at least show them that their god loves me just as much as anyone else.

Ever since that I realised I was transgender, I always wanted to do more for the LGBT community here. But what could I possibly do? I’m pretty much just a kid  (21) and I’m pretty anti-social. It’s not like I have a family I can ask for help. Mostly just myself.

I am just a small speck in this even smaller community here, but I want to make a difference just as much as anyone, so I started small. I sought to participate in LGBT events to show my visibility. I came out to more of friends and I sensitised them on LGBT issues. I started getting more informed about the ins and outs of the LGBT community so I could somehow I make a difference.

Have I made a difference so far? Probably not (lol), but I’m not letting that get me down. There’s still a lot I can look forward to and a lot of things I’ve learned at the start of this journey. It’s a slow start, but a start nonetheless. And that’s the most important part. As long as persons such as myself are discriminated against, I have to give it my all to fight against it so the future generation won’t have to go through what we’re going through at the moment. Even if it’s only by 1%.

Whenever I go out being myself, I usually do get those weird stares and whispers behind my back. Is it hurtful? Sure. But do I let it put me down forever? Nah. I get back up. Tougher than before. Ready to face those jerks and say “You can’t stop me from being myself!”, and be the best damn girl I can be. It helps that I can show visibility to the trans community, to show that we all don’t fall into some stupid stereotype. That I just want to live a happy life just like any other person.

Haha I’m not even sure if I even answered the question I was asked to answer, but hopefully someone gets something positive out of this.