When I first played God Eater 2 Rage Burst, I wasn’t expecting to love it as I did. I did hear a lot of comparisons to Monster Hunter and my thoughts of Monster Hunter as a game are rather mixed, but despite that I fell in love God Eater 2. This is the game that the Monster Hunter series should be.

To start off, you have the choice of a customisable character, male or female. It’s pretty much like the Monster Hunter avatar creator where you can change any physical part of your character, including their voice. Something that’s also really neat is that the game has two versions of their opening cinematic (it’s really freaking amazing and suggest you watch it ASAP): one with a male character avatar at the end of it and one with a female.

Now for one of my favourite parts of the game: There are tons of clothing options!

From my original Steam review:

“This is more subjective, but I was never a fan of Monster Hunter’s fashion choice for your characters. In God Eater, you get to use modern styles of clothing, which is really cool because you can look as cute or as badass as you want. AND THERE’S SO MUCH CLOTHES as you progress. It’s all relatively easy to get, so dressing up is part of the fun in God Eater. That’s not even the best part: Your clothes don’t have stats which is FANTASTIC because that means you can wear whatever you want without worrying if your clothes are holding you back in a fight.

One of the frequent positives I here about Monster Hunter is that you wear what you kill with pride. Personally I couldn’t really care less for it.”

Looking at my screenshots now, I now see I have over 200 images from playing this game. Wow.

At first I was worried that this game would just have a generic story, but I’m pleased to say I loved the story! It was very emotional and the characters go much further than just being typical anime stereotypes. One of my biggest complaints with Monster Hunter is the lack of story in the games and thankfully God Eater gives you one to look forward to.

Hate multiplayer? This game has you covered. Unlike Monster Hunter, it gives you AI partners to help you on the battle field. The best part is that these are vital story characters so it makes the hunt even more enjoyable picking your favourite characters. 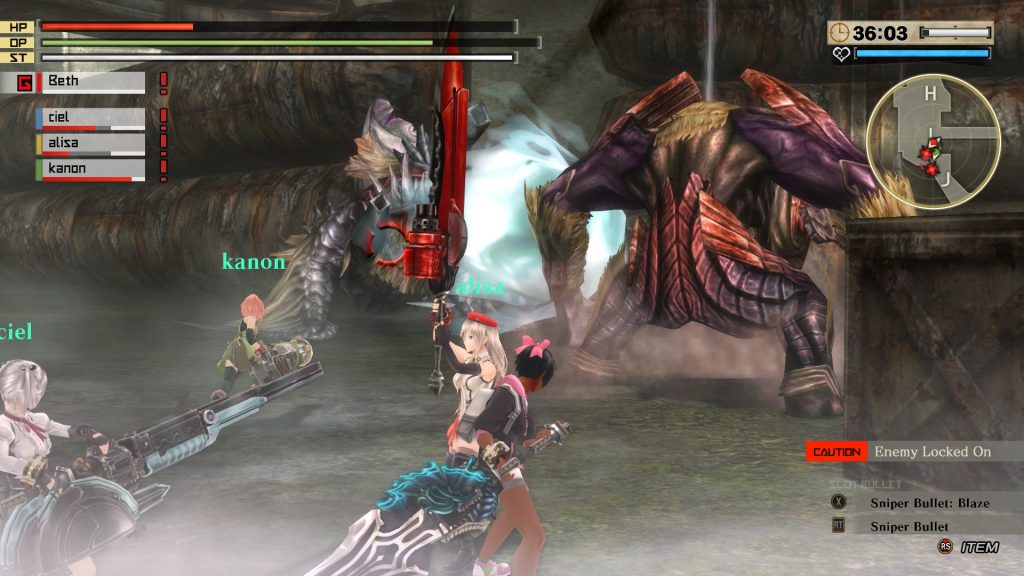 In terms of difficulty, if you’re afraid the game is going to kick your butt like Monster Hunter, you don’t have to worry about that. The difficulty is rather moderate and I would even dare to say that even someone who plays games casually will progress smoothly as well. People will complain about the game being too easy, however that’s one of the positives for me. It makes the game rather relaxing not having to worry about constantly seeing a ‘game over’ screen.

Another bit from my Steam review that gives insight on the performance and graphical fidelity for my fellow PC enthusiasts:

“It’s a port of a Vita game so you will definitely notice it is not as detailed as it could be, even for an anime game. However it still looks really good so there’s no problem there for me. The best thing about that is you can run this pretty well on a mid range computer. I have 8GB of RAM, and even with Google Chrome taking up about 90% of it, it still ran flawlessly at 60fps.”

And the best part about this game is the two-in-one deal. You get God Eater 2 Rage Burst AND God Eater Resurrection (HD remake of the first game). When I first got my code for the game, I didn’t even know this was a thing. What’s even better is that this isn’t a one time deal, it’s always included when you buy the game.

Definitely one of my all time favourite games and I will choose this over Monster Hunter any day.