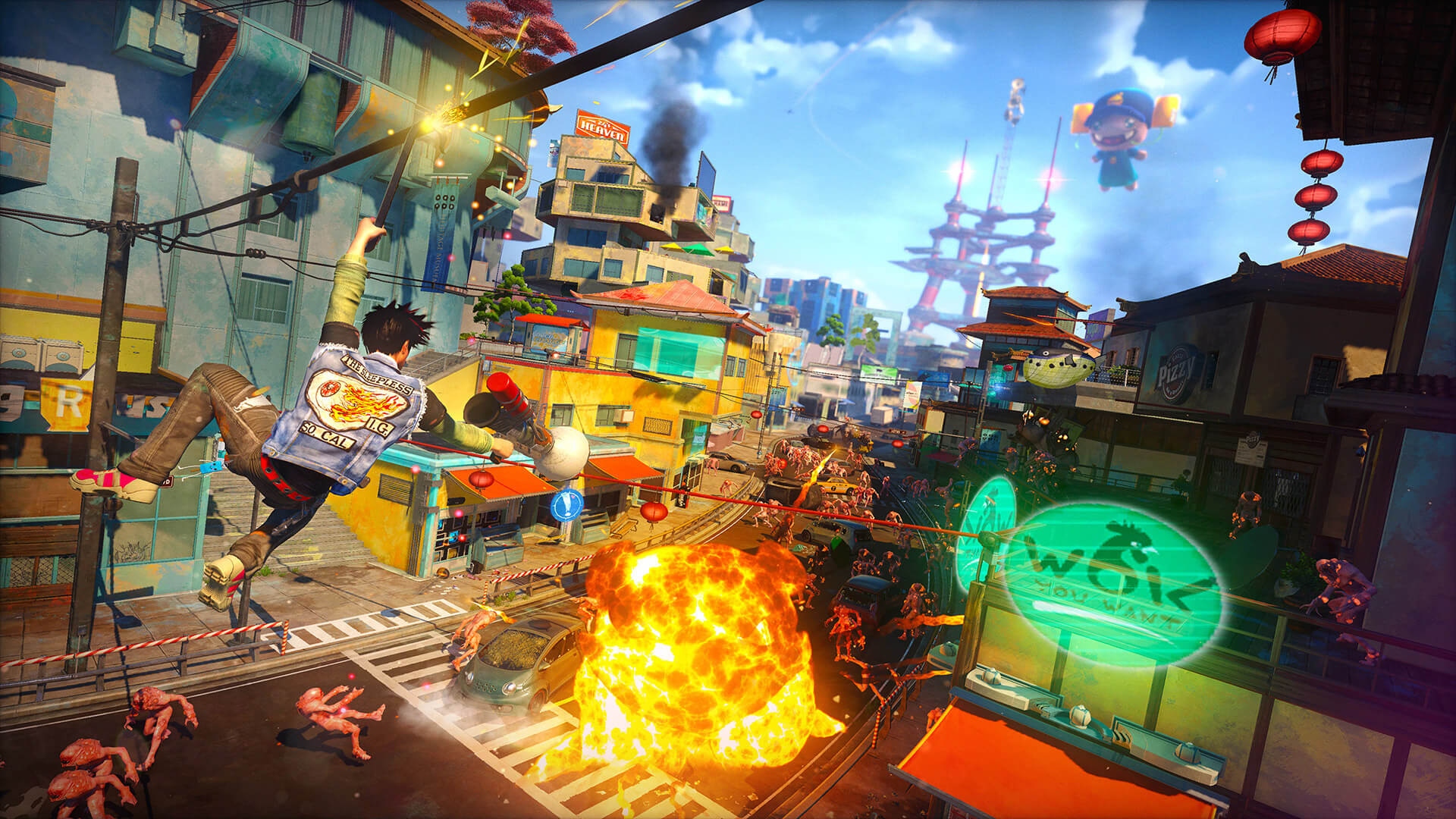 Right now there is an Xbox Game Studios Publisher sale on Steam. Among the games on sale is Sunset Overdrive, a game I’ve had in my wishlist for a while. I wasn’t really interested in it when it hit Steam back in 2018, but that changed when I noticed it had been tagged as having character customization and that it was also made by the studio behind Marvel’s Spider-man on the PS4.

I recently got my gaming computer running since moving to Canada and sure enough, I’m ready to try out some new games after being without my computer for a couple of months (even if it’s not powerful). In fact, I’ve been deciding on buying One Step From Eden, Hellblade: Senua’s Sacrifice and Devil May Cry 5. For now, I’ve been spending most of my time in Titanfall 2, and with the coronavirus pandemic happening, more people are online than ever so I have even more of a reason to play one of my favourite games of all time.

So back to Sunset Overdrive, I bought it, downloaded it and tried firing it up…only to be greeted with this f**king message: 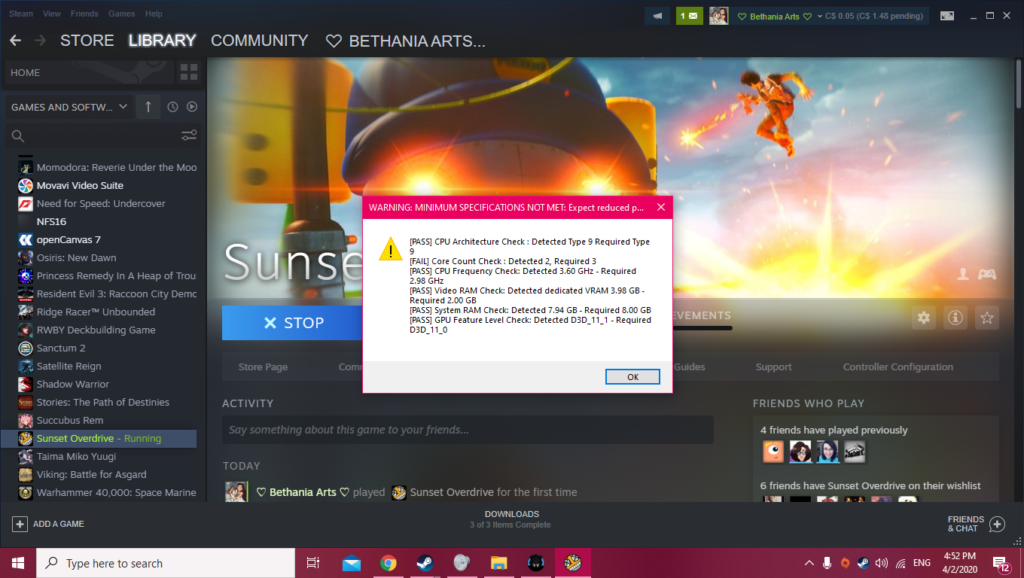 This “system requirement check” is something you’re going to be seeing every time you boot the game. And no, there’s no hack or anything to remove it (I looked). You’re completely stuck with it if this check deems your computer unworthy to run Sunset Overdrive. How did anyone who was developing this port think this was even remotely a good idea?

The thing doesn’t even do its job considering it’s quite laughably saying it only detects 7.94GB of ram in my computer and the required is 8GB. Like, what?!

I get it: You want to warn people that their system is going to have trouble running the game so they can temper their expectations, but there are many other resources for that, the most obvious one being the minimum and recommended specs information on the store page itself.

However, I’m also going to say that those recommended spec info sheets are never a good indicator of if a game will run on your machine. I’ve had programs like AMD’s Game Advisor and Systemrequirementslab say that I can’t run games even on minimum specs, but the 60 FPS counter when I run those same games argue otherwise (granted, for some games I don’t run them max settings). Knowing if you can run a game will always become the most apparent when the player actually tries to play the game on their system. The other solution being to check YouTube for performance videos of your CPU or GPU running the desired game.

Getting to the performance of Sunset Overdrive on my computer, I could instantly tell that it was unoptimised from how erratic the framerate was. Not only was the framerate all over the place, but stuttering came to join the party.

Now before you say that my computer is probably too weak to run Sunset Overdrive and the game could actually be optimised, then to you I say, no. I know how a game that’s too demanding for a computer, and that is well optimised, is supposed to run. The framerate is stable and the game’s framerate will rise or drop according to how the CPU or GPU can handle what’s on the screen. This is how Watch Dogs 2 ran on my computer as it had no trouble maxing the sh*t out of my CPU (also, thanks Denuvo). This was not the same as Sunset Overdrive.

As if the performance of the game wasn’t bad enough, the graphic settings are broken, most notably the resolution adjustor. 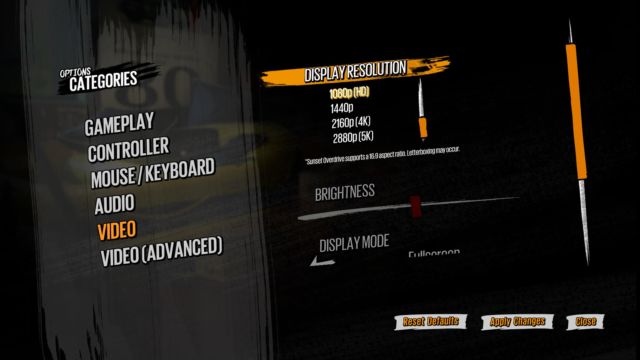 When the game started, I noticed that it was running at 1080p on my 768p TV (the FPS counter would become pretty small). Then when I tried to change it since changing the resolution does sometimes have a drastic impact on performance, I realised I couldn’t do that. Like, at all! The game remained in 1080p no matter how many times I tried applying the settings. Obviously I went to look for a fix, which I shouldn’t have to by the way, but even though I found the apparent fix, it still didn’t work!

Just how the f**k do you mess up something so basic as changing a game’s resolution? It’s not even like it’s from an indie studio either that might run into trouble with something like that. I don’t even think the anti-aliasing setting in the graphics settings got applied to the game until I restarted it.

I tried giving the game one more chance by seeing if I could play it in the state it was in, but I couldn’t bare it with it all. If the framerate wasn’t bad enough, the constant stutters and broken graphics settings sealed the fate for this game being turned in for a refund. And that was all just trying to play the game in the first 30 minutes, who knows what else I would have found if I played through it even longer. This was all a shame too considering Sunset Overdrive looked like a fun time.

I remember reading a post that was made back in 2018 for the game about how the developers may patch it and I can’t help but laugh considering how long the game has been released now. It really shows you how much the developers cared about actually making a competent PC port.

And for christ sake, Sunset Overdrive came out in freaking 2014! That was near the start of this generation, which I remind you is now ending. If there is any game that should have little trouble running, it should be Sunset Overdrive. If my computer can run Resident Evil 3 at a consistent 60fps, considering how gorgeous it is, then Sunset Overdrive has little excuse. 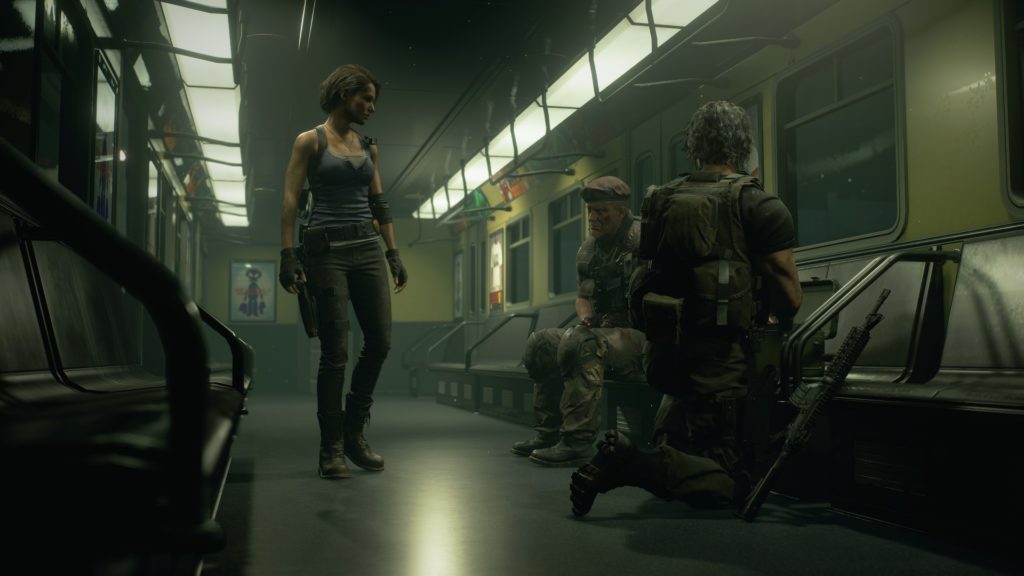 I don’t know the porting capabilities of those handling the Horizon Zero Dawn PC port, but if it runs better than Sunset Overdrive, then my point would have been clearly made.

Now if you’ll excuse me, I have some butt to kick in Titanfall 2.

Hello, readers! I haven’t posted a gaming article in a while, haven’t I? Haha, yeah, I’ve had a busy life in the last few months dealing with housing issues and moving to Canada. I don’t have much to write about for now, but I’m looking forward to writing more gaming news articles and reviews. As you can see I started posting chapters for my book again and I want to aim to be more productive.