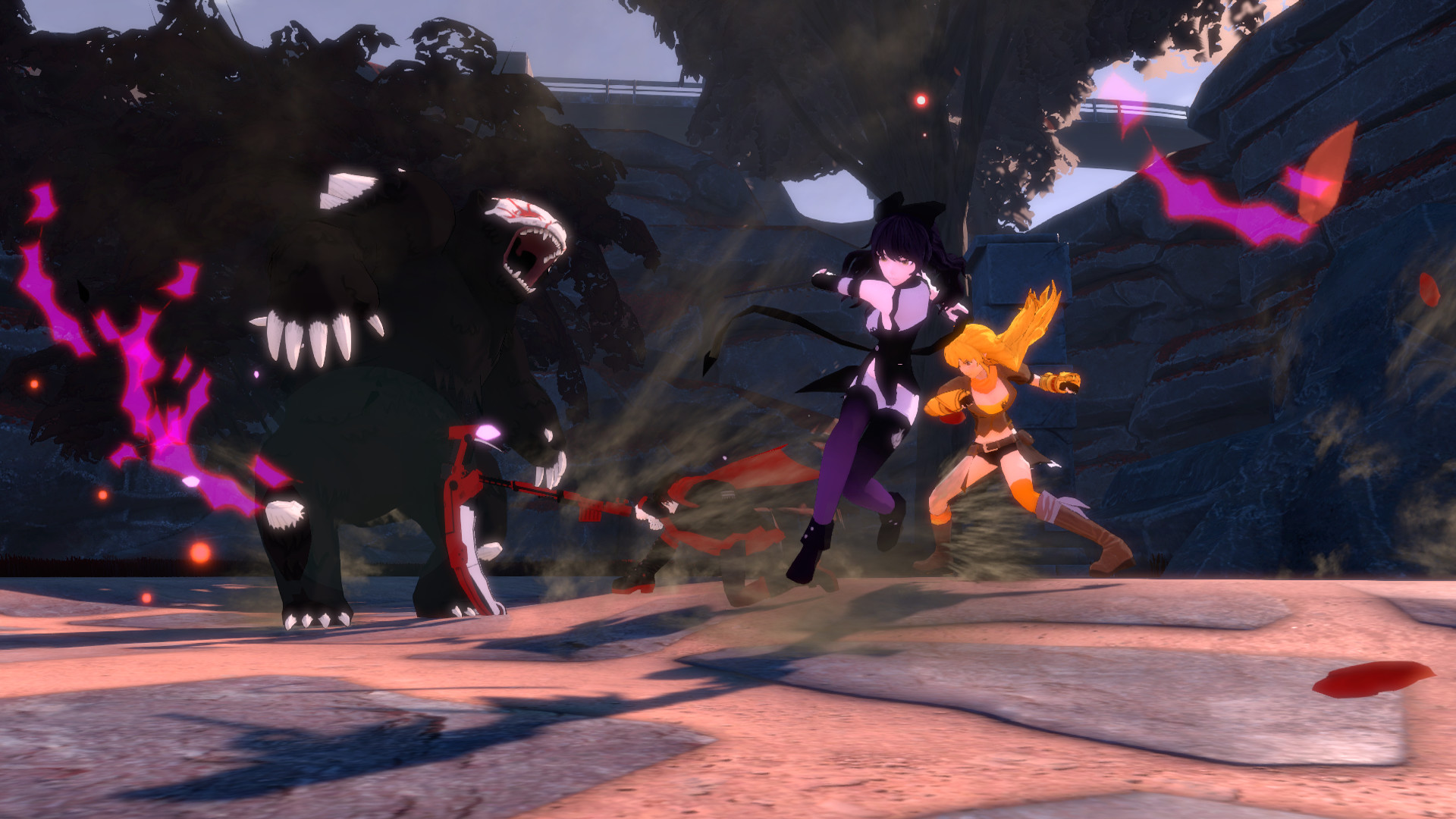 RWBY deserves better than this.

Oh wow. Where do I even begin to sort out this mess? This is one game that should’ve stayed in early access, but RWBY: Grimm Eclipse needs way more than just more time in the oven.

“Play as Ruby, Weiss, Blake, and Yang in this character-driven adventure that explores new storylines, new Grimm types, and a new villain!”, it says on the game’s steam store page.

They made it sound way more interesting than it actually is. I wasn’t even sure if there was even a story until I read the game’s wiki. RWBY: Grimm Eclipse starts off with next to no information in terms of narrative, thus leading to a poorly structured plot. Honestly it feels like it was created out of nessecity to have something along with the gameplay and to give RWBY fans something to play through to justify their purchase. Since RWBY is known for its enjoyable characters and intriguing plot, this comes off as an insult to the series. In short: Don’t buy this game if you want to play it solely for the story.

To put it bluntly, the combat is a joke with little redeeming qualities.

First off, there is no tutorial or move list to tell you what characters does what. It’s all guess work, and it gets better: There aren’t even that much combos at all to begin with. The same goes for the characters’ special abilities, which I have to say are boring. Ruby does this spin move with her scythe which looks like an above-average normal attack. Weiss does something similar, meaning the “special attack” is just for horde control.

When you’re fighting enemies, you have to press button prompts to counter them and do some special attacks. If you’ve played a Batman Arkham game or Shadow of Mordor, then you know what I’m talking about. The catch is that the camera is so atrocious in this game that sometimes you’ll miss prompts that end up getting you hit. The camera doesn’t have a position to auto-focus on enemies, meaning you’re constantly turning the camera to find out where your enemies are coming from. While this is more of a nitpick, the camera zooms out too much on the character you’re playing, leaving less emphasis on how you control and maneuver against enemies.

And what the hell is with this difficulty? There’s no easy mode and the game is way too hard for casual players on its “normal” difficulty. Actually, I could barely call this game’s difficulty what it is because it feels broken. The combat animations are sub-par and enemies feel like their suffering from autism with their unrefined AI. Because of how unpolished the combat is as a whole, the game feels unimmersive and a chore to play. Dark Souls is more fair to you than this mess. You would feel much more accomplished there than in RWBY Grimm Eclipse.

Dodging in this game is useless and feels like it’s purely aesthetical. Why there isn’t a shielding instead of a dodging mechanic is beyond me. At least that would be helpful.

And then the game has the audacity to be dropping frame rates like it’s running on CRYENGINE. It’s not too bad, but you can tell there are some optimisation issues.

I have mixed feelings about the environments. They look nice, but they’re so limiting to maneuver about in. I’m not asking for an open world RWBY game (but that would be freaking awesome!), but walking through the stages in RWBY Grimm Eclipse doesn’t feel enjoyable at all. I would even argue that it makes the character models look out of place with the characters’ cel-shaded art style.

Did I mention the limited graphical options you have without modding the game? I didn’t? Well now you know.

Not ready for a full release.


RWBY Grimm Eclipse feels nothing more than a fan game. If it was just that, then sure, it would be pretty good on its own then. But this was officially published by Rooster Teeth Games, who I’m sure have more than enough resources to make a fully fledged RWBY game, and that to me is unacceptable.

The game is so lazily done that the community has to mod the game to give it features it should already have, and not even that could save this game. In the mod forum post, you can see there are features there that should be in the game without requiring mods, like split-screen play and remapping keys/buttons. It is sad to say that modding the game only made it slightly more tolerable.

Personally I would tell you not to trust the “Very Positive” rating the game has on Steam, but I also understand that the game may not be for me and other people probably enjoy it just fine.

RWBY: Grimm Eclipse  feels like it was just aimed for fans of the show so they can play as their favourite RWBY characters. It in no way feels like a full fledged published game. The last time I played a hack-n-slash that was this half-assed was the Legend of Korra video game, another game that didn’t do justice to its show. You can argue that the game is unfinished, but in this state, the game needs either a complete overhaul or there needs to be a new game entirely.

Just as I was hoping for, Sakura Clicker provides a mouse clicking experience for those who may have anxiety or may need a way to relieve stress. It’s endless so you can play it as much as you want.

There’s a reason why I chose Sakura Clicker out of the other clicker games like Ragnarok Clicker and Clicker Heroes.

The character art is awesome and very appealing, though it may come off as a bit generic to those who want something more stylised. Sure, the art leads a bit too much on the lewd side, but it’s still much more vibrant with colour than most of the other clicker games and the anime art style makes out the most. There’s also a ton of cute characters which makes it all the more pleasant.

Sakura Clicker seems to be the only free-to-play clicker game that lets you customise a protagonist of the game. That was pretty important to me since I didn’t just want to feel like I didn’t exist at all within the game. My only complaint is that most of the costumes can only be bought with real money. This wouldn’t be so bad if the game at least gave you two extra costumes for free so you wouldn’t feel like you’re being extorted to look pretty within a game.  You can also buy pets, but they’re also difficult to get.

Unfortunately one of the biggest downsides to Sakura Clicker is that it pretty much has no graphical options. You can’t manually resize the window at all, so you’re stuck with a huge window on your screen when you could be multitasking doing something else. The only reason I’ve put up with it is because Sakura Clicker pretty offers a better experience than the other clicker games. There is the option of moving the game’s window a little off-screen so you just have to click a part of it, but it looks really awkward.

Without a doubt, I like Sakura Clicker the most out of all the free-to-play clicker games on Steam. It’s just a shame that it stops itself from being a truly perfect clicking experience with annoyances that could be so easily rectified.

I bought the RWBY game in 2018 because I liked the show and it was finally 1/2 price. I think it has an amazing soundtrack, but agree that the plot seems like it was written in a day. Nonetheless, I have been enjoying this game daily in multiplayer mode for about a month now.

Thank you for leaving a comment! <3 It's good to know that someone else can enjoy it at least, and that the multiplayer seems enjoyable ^_^