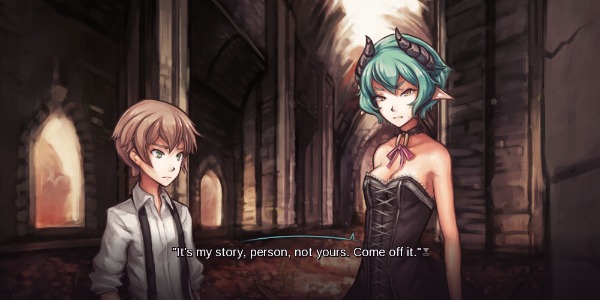 Oh god, this actually made me cry. Juniper’s Knot was so emotional that I was pleading that it won’t end at its climax. I can’t remember the last time anything has made me so overwhelmingly happy and sad at the same time. It almost hurt my heart when the credits started to roll.

The artwork of Juniper’s Knot is phenomenal! It’s an exquisite painting art style that I hope to get similar at making myself. From the background to character art, it is just so elegantly beautiful. Even the expressions of the characters’ face were so nicely done.

At first I found the music selection to be quite distracting. It broke the atmosphere for me and preferably a more soothing melody should have been used in the beginning of the game. Then as the game progressed further, the music quality went up by hundred! When the song “Bleeding” started to play, I almost lost it at how amazing it was!

You can listen to it right here! Now tell me if that isn’t one of the best songs you’ve ever heard in a visual novel!

Juniper’s Knot is one of the best free visual novels I have ever experienced (next to CUPID).There was of course no hesitation in my mind to buy the Donation DLC. I only wish I could pay more. I would literally beg for a sequel to Juniper’s Knot. It doesn’t even have to be a sequel, maybe something to just let me know how both the protagonists are doing.

As you can tell, I kept the story details to minimum since it is highly important to me that others read it without any prior knowledge of the game.

When persons said they don’t want to spoil the game for anyone, you should just go and play it, I see what they meant. Giving any hints about what you’re getting into with Doki Doki Literature Club may dilute the experience for some. That’s why it’s important to go in and play the game completely blind. Unfortunately I wasn’t so lucky since everyone was posting memes of the game all over social media when it released. So with that said, I’m not going to go into the game’s story in this review.

Doki Doki Literature Club is surely creative, that I can say. Once you progress further within the game, you’ll notice all these neat tricks that the developers utilise throughout it to really make the experience feel very  surreal.

The artwork and illustrations are unsurprisingly pretty good. The character art has its own little unique style to it. It looks a little weird in my opinion, but I love the art regardless.

Now the music, holy crap, the music is f**king PERFECTION. Along with Juniper’s Knot “Bleeding”, Doki Doki Literature Club’s “Your Reality” song is an amazingly, emotional melody that I play forever on loop whenever I get the chance. Once you play through the game, you will notice how significant the song is to the it and how it perfectly matches the game’s soul.

One of my biggest issues with Doki Doki Literature Club is that you can’t choose your gender, or make your own character. You play as this random guy who is friends with one of the game’s characters. It seemed pretty silly considering you have to name him and people usually opt for their real name (or a nickname). I know some of the illustrations in the visual novel, has your “guy character” in it, but I would have really enjoyed it if the game did like HuniePop and just replace pronouns without altering the script much. Even if it sounds like I just want to play a yuri game (lol).

Doki Doki Literature Club places you into this surreal world that turns into a uniquely, intriguing experience I have never experienced in any other game or visual novel. It’s “quirky” bits are well structured, but it never left me overwhelming impressed either. So with that, I would say Doki Doki Literature Club is certainly a fascinating visual novel to play, especially as a free visual novel. But at the same time, don’t expect something that would change your perspective on life. If you’re reading this review, you’ve probably already seen the memes anyway, so now’s a good time to play it.