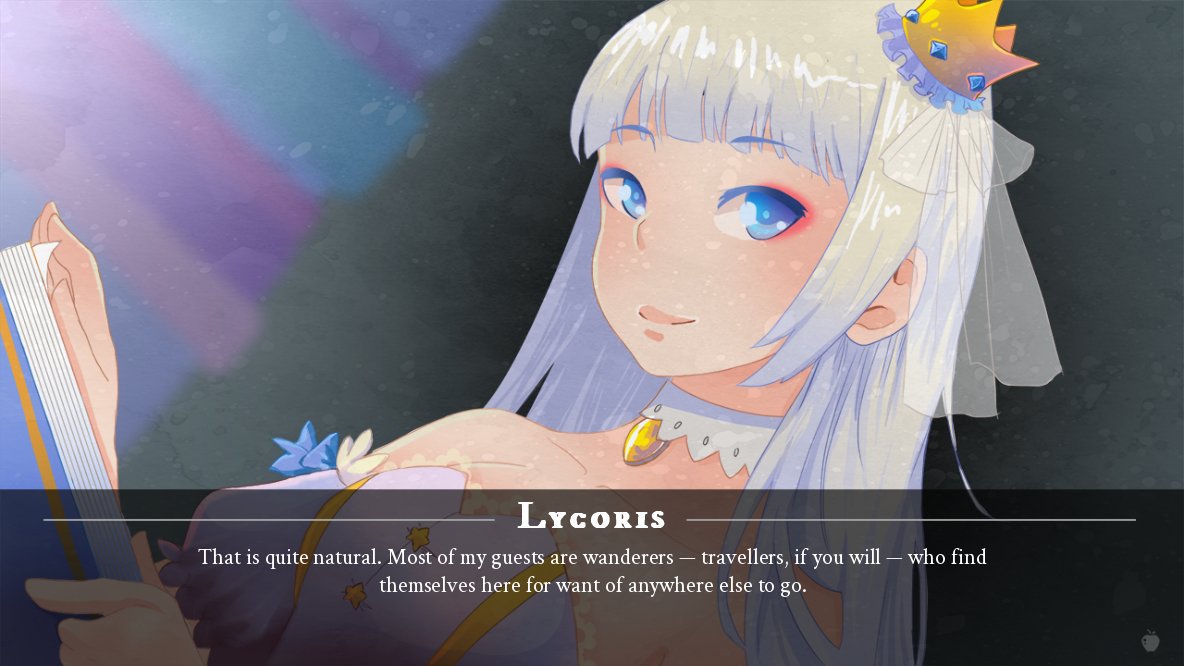 Once On A Windswept Night

Warning: If you hate visual novels that make you repeat a story over and over again until you get the “best” ending, you may want to avoid this.

Midway through playing it I was adamant on giving this visual novel a negative review, until I reach the true/best ending. It was so emotional that it actual made me tear up, maybe because I can relate to it a bit too much. It was beautiful, yet the question must be asked: Was worth the grind? Yes, but I can also understand why someone would want to quit playing half way through.

The general story and lore isn’t interesting at all until you finally understand how to progress the story. Repeating the visual novel multiple times can get really frustrating and the game doesn’t hesitate to throw bad endings your way. It’s not like in Long Live The Queen where you have to skillfully avoid death. It will feel like the visual novel is genuinely trying to upset you by holding the true ending ransom.

The cast of characters at the beginning of the visual novel can also be annoying as they fall into the typical anime stereotypes, but fortunately, it does get better as you progress the story and understand the back stories of each character.

I believe Once On A Windswept Night rewards you with an exceptionally well ending once you’re willing to go through that visual novel grind to get it, but of course, that may vary from person to person. But personally, I can confidently recommend it being worth your time for the heartfelt ending alone.

Once Upon an All Hallow’s Eve

This was so sweet.

This was such a sweet, emotional visual novel. The story was well written and pretty interesting. I only pursued Vern as my love interest but it was enough to pull at my heart strings intimately. I enjoyed almost every bit of it.

Some might say the ending is maybe a little too cliche, but if it is, I gladly love it the way it is. Sometimes not all stories must have this super unique climax, sometimes the only real thing that matters is creating a story that leaves a smile on yours and someone else’s face.

The art is really nice and the music matches the tone of the story well. My only complaint is regarding how confusing the choices are, as it’s not always obvious which choice you choose leads to the boy you’re trying to pursue.

Download “Once Upon an All Hallow’s Eve” on Steam.

Written in the Sky

A short and sexy story of two girls.

This is a kinectic visual novel, meaning no choices. It was a really sweet and short story about two girls and I enjoyed it quite a bit. I’m not sure why the main protagonist was an adult loli though (lol). At first I thought it was just the artist’s style, but they seem more than competent of drawing an adult woman once you notice the love interest of the story.

This visual novel contains one sex scene and I really think it genuinely adds to the development of the two characters in the story, not just for the sake of having a lewd scene. As you start the visual novel, you’ll be asked if you want to enable it and very interestingly I noticed it seems more work was put into the sex scene than the rest of the visual novel (lol). I’m not saying that the rest of the visual novel has little work put into it, in fact, it’s all done pretty well. But you’ll noticed that the two characters are limited in their expressions, or animations if you will. It’s only in the sex scene where you notice a great emphasis on movement and such, which of course is nothing but a good thing.

The story kinda ends on an anti-climatic note, but it was good enough that if there wasn’t a sequel then I wouldn’t be too bothered.

There isn’t much else to mention, but I loved the few illustrations in-between. It reaffirms how nice the art style is.