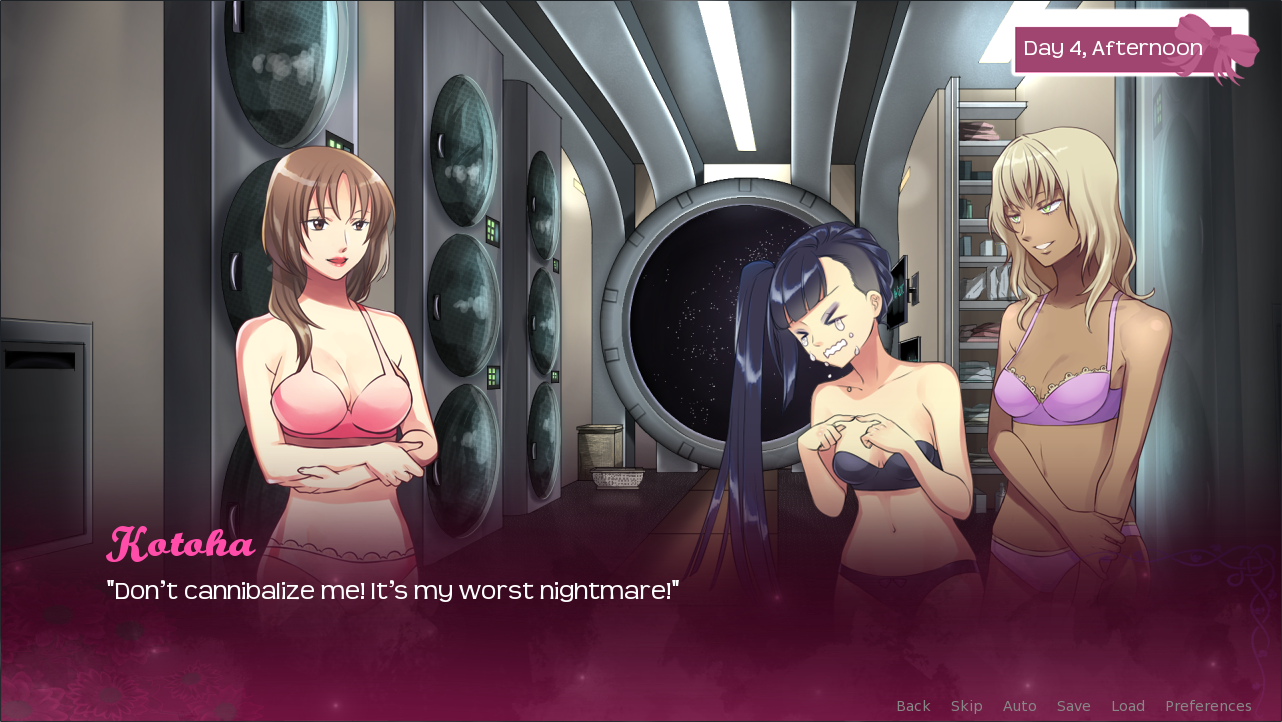 I’m not sure what to think.

The story/writing of the visual novel is pretty average. Not bad, but not good either. If I had to find a word for it, I would say that it was just “fine”.

Three girls end up on a spaceship and must now spend their lives together. You learn about them more as you progress the story, but it also doesn’t really get into too much background detail about everything and seems to be more focused on getting with either girl.

I do have a bit of a problem with there only being two romance options and both of them not being really likeable. Kotoha (the youngest) feels too much like a child so it feels really weird having a relationship with her. Sara tries a bit too hard to be a jerk…

…and I don’t think that making moves on Sara after she lost her fiance is going to bode well with some people. It seems too  insensitive and I can see a lot of people taking issue with that.

I think a polygamy route would have been a best ending for this game in all honesty. There’s really no happy end here when only one girl gets to be with the protagonist and the other has to be alone. Kotoha’s route kinda does it, but she turns out to just love her Captain too much to have her be with another woman and it really hurts her in the end, thus getting a bad ending. I loved Sara’s dark, yandere bad ending but it was troublesome as the hardest ending to get. No matter how much I deliberately tried to upset Sara, it just wouldn’t work and I ended up using a walkthrough in the end. I wish it elaborated more on the events that happened after Sara’s bad ending as I do enjoy that darker kind of story telling. Finally, Sara’s good ending is disappointing and leaves way too much to be desired.

A little disappointed that it wasn’t fully voiced. There was only partial voice acting, which I turned off since it was more of an annoyance than anything.

You probably noticed that I haven’t mentioned the art or music until now, and that’s because there isn’t really much to say about them. The art is nice, no doubt there, but there’s really nothing unique of its style that would set it apart from other anime visual novels. Same goes for the music which I didn’t pay attention to since it wasn’t really interesting.

There’s a lot of mixed feeling going through my head as I write this review. Blossoms Bloom Brightest isn’t really a good visual novel, but it’s not a bad one either. It could have been a better visual novel, but not without major changes to the story and characters. It just doesn’t leave you with any satisfaction no matter which route you choose and that’s just a shame.

You may not want to let your friends or family know you play this.

Guess what? All the girls in HuniePop are fully voiced in english which gives you all the more reason to play it.

This was a bit hilariously embarrassing to play. I usually voice my own character when I play visual novels, but the dialogue when flirting with the girls is just so ridiculously funny I just couldn’t keep a straight face at all while playing it.

The flirtatious dialogue choices don’t seem different whether you play as a guy or girl, which makes it a bit both annoying and embarrassing because as a girl who likes girls, I don’t think I would ever seriously use those lines on someone I was interested in. Most of the dialogue choices are either really over the top or quite unappealing so you have an option to “lose” or “win”. Not to sound critical, but they sound like something a guy with a very fantasied view of dating would say. However, it’s not like the game is grounded in reality anyway so I guess it’s fun to just pretend that you live in a world where this is possible.

I do wish the majority of the girls were more likable or interesting in more than one way. They are many different girls with various personalities and most of them didn’t feel like they fell into some sort of cliche anime trope, but they didn’t really appeal to me either. In the “A Little Lily Princess” visual novel, I loved all the girls regardless of their personalities, so I found it a little weird that I didn’t feel the same with the girls in Huniepop. I guess it really just comes down to personal taste.

The puzzle-matching and simulation gameplay is fine and pretty much everything what you’ll expect, but I wish the game did more by including more linear interactions with the girls like in a traditional visual novel.

Huniepop feels like you’re using a mini-game to flirt with girls, and with that I think I understand how the game works. It doesn’t play like a visual novel where you would choose one girl to pursue and then have a happy ending with her, the game focuses on you dating as many girls as possible to eventually get them in bed. I went into the game expecting sort of a traditional visual novel with a mini-game in it, so it surprised me when I noticed that there wasn’t really a way to pursue only one girl. There doesn’t seem to be much of a story behind all of this either, as you’re just taking girls out on dates and winning their affection.

I kept getting this nagging feeling as I played that the girls didn’t feel genuine in terms of them dating someone of the same gender. What I’m trying to say is that you don’t really feel like you’re treated like a girl. People react and behave differently depending on the gender of the person they’re talking to, as they usually wouldn’t treat a guy the exact same way they treat a girl. That’s where HuniePop trips up. It just feels like they switched the pronouns in the dialogue and that was it. Sure, we can pretend that all the girls are bisexual, but all of them barely acknowledge that they’re dating a girl. And honestly, it kinda makes it less fun.

I think the game would have benefited just a little more if there was a way to create an avatar to use in-game. It’s kinda hard to feel into the game when you’re some faceless person who has no idea what you look like to the girls.

I’m not sure if it’s worth mentioning but this game doesn’t hold back on the swearing. You may or may not expect to hear cute girls swear in a visual novel so that maybe worth noting, or not. I’m just glad they used it in a really humorous fashion instead of it feeling forced, like in Life is Strange for example. There are times I would be in tears because of how funny the dialogue is and how well the voice actors portrayed their character.

It’s kinda sad to see this community is toxic though. I’ve read recently about the “controversy” of the devs wanting to include a trans character for HuniePop 2, and half of the community feels the need to criticise the developers for their decision. I just don’t get it. You have the option to not go after most of the girls if you don’t want to (like in real life), so I don’t see why almost half of the community feels the need to crucify the people who worked hard on bringing them a good game and possibly a better one in the future. It’s just sad that this toxic culture is a prominent part of the gaming community and it makes me sad to be a gamer.

HuniePop is a pretty unique experience when it comes to dating sims. I don’t think I’ve ever played a dating sim that made me laugh so much. It was fun and HuniePop has that charm that isn’t so easily replicated by others. However, I do wish there was more to explore of the game story-wise as it would have given the game much more depth. But then again, this is a game of a fairy helping you to get laid by playing girls like a Bejeweled game, so it’s best to not take the game too seriously and just have a fun time.

A lot of “plot”, but barely actual plot.

It was then I realised that this game was clearly made for one purpose in mind: To show off cute anime girls in lewd situations. It’s really not anything worth taking seriously at all and I’m sure the developers know that as well.

If tits are your reason for buying this game, I think the visual novel spends a bit too much time on unimportant dialogue and story segments. You can pretty much figure out the entire visual novel by speed reading the whole thing if you’re skilled enough. It’s really not hard to do considering the story pulls from every anime cliche in the book.

Lastly, the artwork is very cutesy, which adds to the visual appeal of the entire visual novel. It makes those lewd illustrations all the more satisfying to look at (as you can see from the screenshot I showed at the beginning of the review).

Whether Sakura Angels will be worth your time is really going to be up to you. If you’ve seen the screenshots and they really entice you, then as long as you know that’s really the only high points of this game, I would say go for it. However, if you want more than just tits in your visual novel, then Sakura Angels won’t feel like it’s worth it.