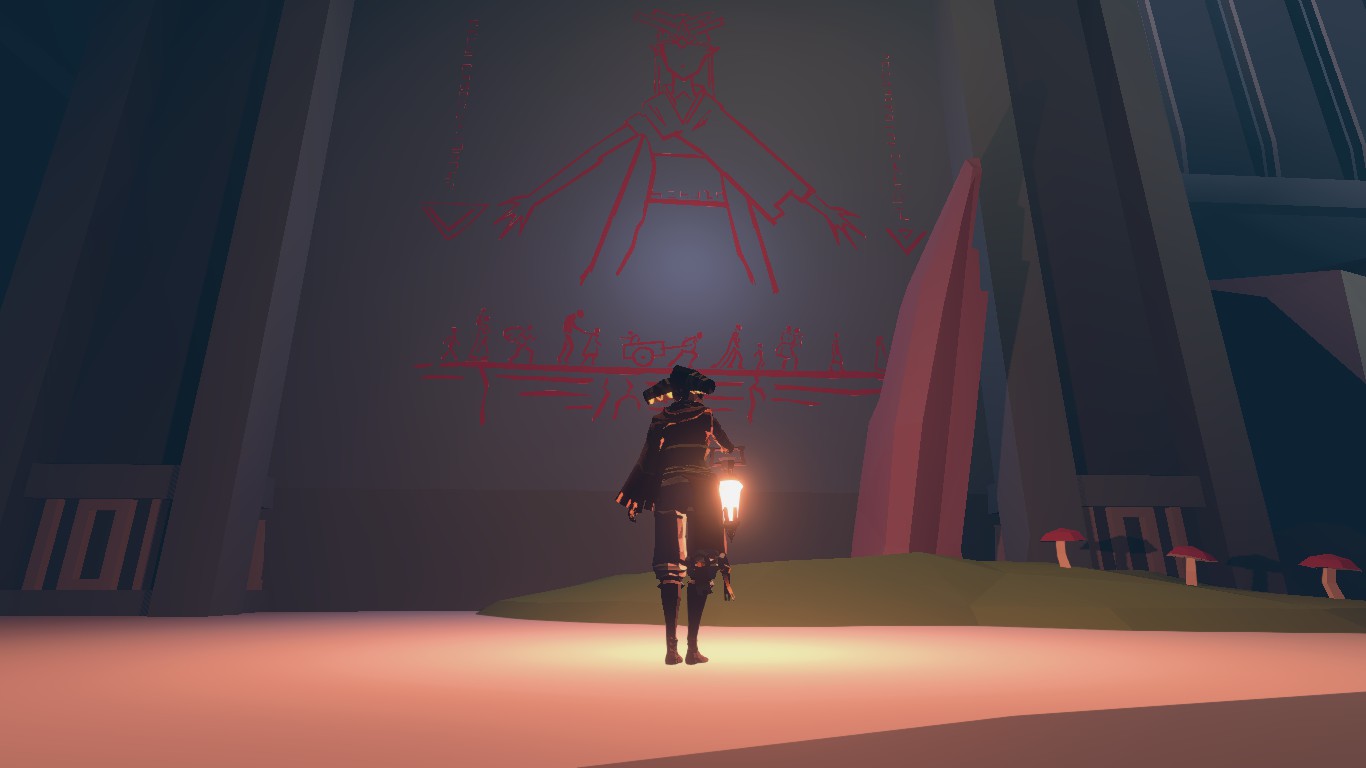 As the art style is very unique and colourful, it only makes the game feel much more like a work of art that you can immerse yourself into. I’m not personally all positive for polygon-style though, as it makes characters feel like they have less of an identify when they barely have faces. It feels like you’re interacting with static, faceless objects.

I do enjoy the emphasis of exploration the game has. It’s really nice and rewarding, and the open world is huge enough to make finding new things an enjoyable experience.

Unfortunately I don’t think this is a game I’ll ever complete for one specific reason: the puzzles. I personally suck at puzzle games, probably for the same reason I suck at turn-based RPGs. The puzzles aren’t always obvious and you have little guidance when travelling to locations. Some may argue that it’s part of what makes the game great: the challenge of exploration. But for me it kinda takes you out of the immersion since you’re basically lost most of the time. It would have been really helpful to just add an objective pointer for more casual players.

But while difficulty is a big turn-off for me when it comes to the games I play, I’m not too upset with AER because it’s just so relaxing to just unwind and fly through the skies. It gets even better when you have orchestral music playing in the background. If I’m able to progress through the game, then it’s a nice bonus.

Don’t take this one too lightly.

For the record, I personally I dislike RPGMaker games. The 16-bit uninspired visuals is an eyesore to me and it’s usually an excuse for  developers to recycle assets. However, I can’t say the same for Skyborn as it definitely feels like a game that has a lot of soul and passion put into it.

It’s a funny and really charming game with a delightfully interesting story. I love the cast of characters, especially since they’re not typical stereotypes, they are genuinely interesting with their own unique backstory that adds more to the plot as you progress through the game. I would say the story is the most enjoyable and heartwarming thing about the game. It has a lot of fun twists and intriguing lore. It probably won’t be super unpredictable, but it’s definitely a satisfying story. It’s almost sad something like it couldn’t be remade into a more ambitious game with a bigger budget. The lore of Skyborn makes it ripe to make plenty of spin-offs and sequels.

There’s nothing much to say about the gameplay really. It’s the basic kind of turn-based RPG and is the most generic thing about the game. However, while I usually despise puzzles in games, the ones in here weren’t difficult and were actually quite fun. I would say that was the more interesting part of the game in terms of gameplay besides crafting.

I played the game on Easy mode so it was fun to just feel OP’ed and breeze my way through the game in about 4-5 hours (Don’t judge me. I suck at turn-based RPGs o(╥﹏╥)). According to HowLongToBeat, it usually takes on average 8 hours to beat the game presumably on Normal. The most surprising difficult part of the game was the last boss. I thought it would be no problem beating him, but I actually lost for the first time in the game and I had to think carefully about how to beat him. For a minute I thought I was playing on Normal mode. All the more reason to why I mostly play story driven games on Easy now.

Let me just say that I am IN LOVE with the art of this game, specifically the character designs and illustrations. I loved it so much that I actually waited through the credits to see who the artist was. Unfortunately, I forgot who it was in my haste (￣ ￣|||),  but they definitely sold me on picking the game up in a bundle. I wouldn’t have been interested in buying it if it didn’t have the art style that it did.

As I first started to play the game, my brain started going on a nostalgia trip as the 16-bit graphics reminded me a lot of the time I spent playing “DragonballZ Buu’s Fury” as a kid. It made me think differently about my opinion on RPGMaker games.

In conclusion, dismissing Skyborn for being “another RPGMaker game” will cost you on missing out an exceptionally charming game with a fun cast of characters. The story and lore is definitely worth your time to experience and it actually makes me sad that there may not be a sequel to this game anytime soon.