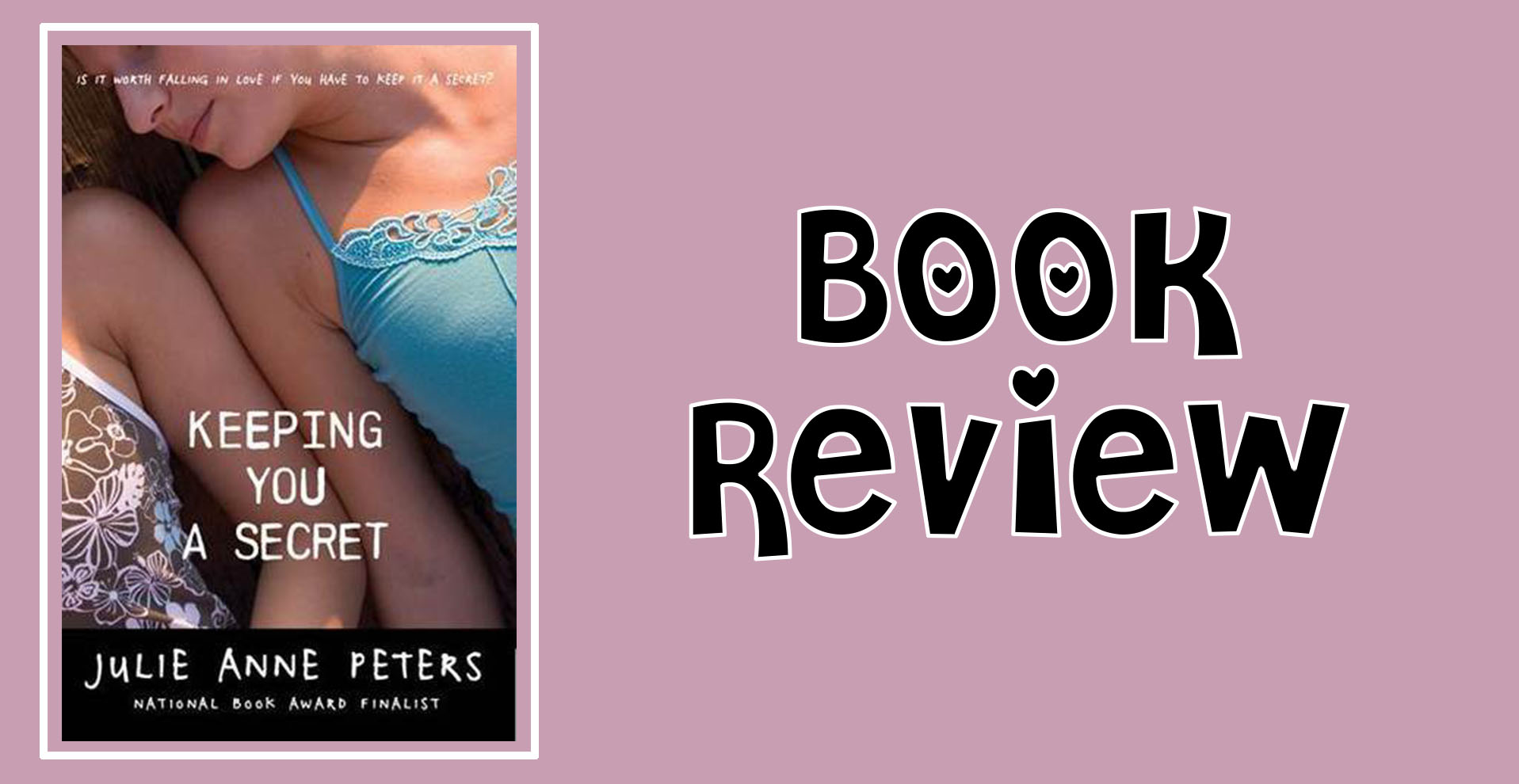 Honestly, when I started listening to ‘Keeping You A Secret’ (by Julie Ann Peters) via Audible, I was only expecting another cute lesbian story to relax to. Even reading the description after I already finished the book would make it seem that way.

But nope, that wasn’t the case as the book got so emotional that it even brought back some of my own personal unwelcomed memories, but not without also leaving a heartfelt impression on me.

Now before I get into details, I must advise that this review IS NOT spoiler-free, even if I don’t go into everything. Sorries!

Starting off, I would say my biggest criticism of the book would be its rather boring and cliche start. i would even argue that it borders on filler.

Holland Jageaur, the protagonist, is seen by her peers as this highly respectable individual. Not only is she smart, talented and popular, but she’s the student body president of South Glen High. She has a boyfriend, envied by others and pretty much seems to have everything down pat. But as you would expect, this isn’t the case when you step into her perspective as she also has her own struggles as any other teenager does.

The other cliche part of it comes along where the new transfer student, Cece, arrives at Holland’s high school and is established as Holland’s love interest. Holland, of course, falls for her. But don’t forget: Holland has a boyfriend; Seth. As far as she knew at the time, she was straight and probably just had a “girl crush” on Cece.

Cece’s presence then leads Holland on the path of discovering her sexuality.

Cece is pretty much an “unapologetically gay” character, but for me, she wasn’t irritatingly written. Where some writers would make the mistake of making a character’s sexuality nothing more than than their entire personality, Cece moreso uses her sexuality as a badge of resilience.

However, this doesn’t go well for Cece you realise that South Glen is pretty conservative, meaning she becomes a target within the school during her stay there. And with Holland having fallen for Cece, it triggers a chain of events leading to her seeing South Glen in a completely different light than she did before, especially when it came to her friends who had no problem with letting their homophobia be known once Cece came into the picture.

For the first time ever, Holland was seeing the world from the eyes of an LGBT individual. Maybe she noticed it before and ignored it, but now it was something that was far more prevalent in her eyes, given her infatuation with Cece.

All of this pretty much takes up about half of the book, and as a reader, the wait can seem like a bit too long from Holland falling in love to actually getting to be with Cece, even if the same happens in real life.

However, while that maybe my biggest criticism, it’s also one of the book’s greatest strengths.

From Bad To Traumatic.

Having confirmed her feelings with Cece, Holland was now in the situation where she had to break up with Seth, her boyfriend.

How did it go? Seth radiates incel energy, so I’ll leave that for you to guess, lol.

As the reader, you may assume that the breakup with Seth was just a bump in the road, as Holland and Cece were now together, but Cece insisted on keeping it a secret (thus the title of the book). After all, their relationship was starting to get really cute and wholesome and all seemed well with the world.

Oh, but that wasn’t the case. The breakup with Seth was just the tip of the iceberg.

As Holland and Cece’s relationship progressed, Holland starts to slowly lose the things she was known highly for, including high grades and being reliable. Things go from bad to super worse when Holland’s relationship with Cece is outed, thanks to incel Seth not being able to handle rejection and her “friend” Kirsten fueling the flames he metaphorically started.

Holland is left homeless thanks to her hostile and homophobic mother. Things at school didn’t get better as the school saw Holland now as some kind of monster now and was being discriminated by those she thought cared about her (sh*t, this got depressing sad). She is left to turn to Cece and her family for help. The future is rather bleak for Holland because it’s not like she can suddenly move in Cece and her family either. Even when there was some hope for Holland, it could be hardly called that.

Holland’s life went from almost perfect and normal to bad to worse to traumatic. She lost everything.

Remember how I said that the lengthy first half’s weakness is also one of its greatest strengths? This is what I mean. For the first half of the story, we get to see Holland at the peak of her popularity. But when Holland finally gets to be with the one she really wants to be with, her entire life comes crashing down like a pile of cards.

Those two sides of Holland’s life show just how impactful falling in love with Cece was, and that’s why it’s one of the book’s greatest strengths.

Cece reveals the real reason why she wanted to keep her relationship with Holland a secret. The initial reason of trying to protect her wasn’t the main reason.

Cece had a relationship in the past where one of the girls she was in a relationship with cheated on her with someone else after that person had come out to everyone and was met with overall acceptance. Cece seeing Holland being a mirror image of how that relationship started and how it may end, she took the precaution of stopping Holland from coming out, despite her saying that she was ready at the time.

This is why when Holland’s life was completely shattered, Cece blamed herself for all of it.

Was it selfish? Yes. Can you blame her? No, and neither did Holland.

No one wants to have the same bad experience twice, so Cece did what she thought was best. Even if her actions did indirectly affected Holland, she also couldn’t fully foresee the things happening the way they did. This is one of the most interesting aspects I’ve come across of an LGBT character and it works really well with  Cece’s character type.

I dare say that adding this kind of character depth to Cece was far better than giving her the cliche “I’m trying to protect you” character quality.

Coming to the book’s conclusion, Holland reaches out to her best friend; Leah. She kept her in the dark because of Cece’s promise, but now she could comfortably tell her the truth.

Honestly, it was one of the most wholesome things ever and it could just make you cry. There was no question that Leah was a character who would be there for her best friend no matter what, even with her already knowing what was affecting Holland without her saying anything. So when Holland came out to her, it just filled me full of butterflies. They reminisced about their childhood and it was simply lovely.

Holland was eventually invited by her mother back home. However, her mother didn’t budge on her initial stance and had no respect toward Cece. She attempted giving Holland an ultimatum to dump Cece, trying to manipulate her.

But Holland, being the stronger now, didn’t waver. She stood up for Cece and herself with all of her tenacity, hands down my favourite part of Holland’s character development. It reminded me just how important it is to stand up for what you believe in and not submit to terrible people like my very own parents.

Not going to lie, I was almost in tears (I fought them back).

This was all too familiar to me. One might consider being trans and gay to be two completely different experiences (oh wait, I’m both haha), but it’s funny how the experience of the two overlaps so much. Replace the love part with gender and it becomes pretty identical.

Just like Holland, my grades dropped due to the constant friction between my parents and I, regarding my gender identity. Just like Holland, my mother is super homophobic. And just like Holland, I was homeless (well, quite still am. In a temporary living situation). Even with the end where Holland came out to her best friend who was originally in the dark, was all the same.

And the final nail on the head was the part where Holland went on to pursuing art in college, the same as I who has an Associates Degree in Visual Arts.

Yeah, this was all super surreal. I guess the only other difference is that I haven’t found a happy ending to my saga yet, lulz.  ¯\_(ツ)_/¯

Keeping You A Secret went somewhere I wasn’t expecting at all. Hell, if I knew I was going to be reading about my life, I probably would have skipped it (lol). I don’t need reminders of my less than stellar life. ┐(￣∀￣)┌

Despite all of that though, this still has to be one of my favourite books, at least in terms of the LGBT variety. Holland Jageaur is a great protagonist for this book and her story is no doubt passionately written, And while Cece may be a questionable character to some, you can’t deny she was the catalyst for Holland’s beautiful character development.

The book may seem depressing during its second half, but there’s also humour and charm sprinkled throughout it to thankfully reduce the tension. Not to mention that there is joy in seeing Holland grow as a character, from her innocent crush on Cece to her finding the resolve to stand up to her mother’s bigotry. Holland represents the struggles of what we in the LGBT have to deal with accurately, and most importantly, she also shows us how strong we are in the inside.

So the final question: Do I recommend Keeping You A Secret? Hell yes, but if you’re an LGBT person yourself and probably don’t want to have some triggering stuff unintentionally coming back while reading, then you may want to tread cautiously on this or find something less emotional.

Audiobook version: The performance of Rebekah Levin as Holland is pretty exceptional, her only weakness being able to properly portray some of the male characters in the story.