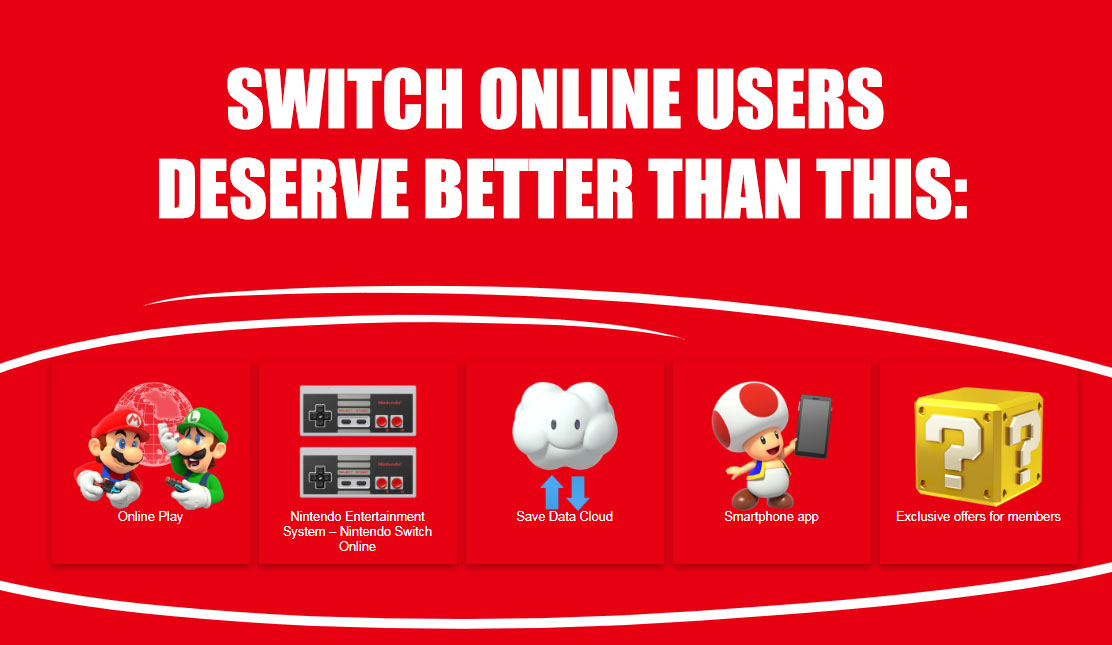 Switch Online continues to be a disappointment.

It was recently reported that the Nintendo Switch Online service is soon going to hit its 10 million users milestone. Right now it has 9.8 million users as of Friday, April 26th 2019.

But as the service’s user base continues to grow, I don’t believe Nintendo deserves this much Switch Online users for the lacklustre offerings of the service.

As many of you may already know, the Nintendo Switch Online service does not offer much compared to the likes of Playstation Plus and Xbox Live Gold.
Nintendo may have won people over with the Nintendo Switch, but its users should be given the same quality, if not better, as what Sony and Microsoft offer for their online services.
(More specifically Microsoft because Sony has a bad reputation for being anti-consumer.)

Before we go into details I should probably give you a little insight on what the Nintendo Switch Online service is.
Just like with PlayStation Plus and Xbox Live Gold, Nintendo Switch Online is a subscription service you pay for, either monthly or yearly, to get significant online features for your console. The most significant of these features being online multiplayer access.
In the previous generation, Nintendo did not have a subscription service for the Wii U, thus it was one of the only redeeming qualities of the system.
It doesn’t matter who you are, you will most likely agree that having to pay to play online with your friends is not something you like doing, as PC gamers enjoy the privilege for free.
After the Wii U’s failure, Nintendo decided to up its game with the Switch, thus leading them to join Sony and Microsoft’s “Online Service Club” and with asking users to pay for online features for their console.
And who’s to blame them for doing so.
Sony generated $12.5 billion in revenue from PSN alone in 2018. Observing the success of PlayStation Plus and Xbox Live Gold, there was no way Nintendo could ignore the potential revenue from a similar service of their own.
When Nintendo launched the Switch back in 2017, it lacked the Switch Online service, meaning that all of its users enjoyed the Switch’s online offerings for free. It would only be until September 19th 2018 that the once free features would now only be accessible through the Switch Online service.
Financially, it was a smart move Nintendo would eventually have to make. However, for the consumer, it would come at their inconvenience as they were now being told that they have to pay for features they previously had free access to.
But at least the price for Switch Online isn’t as high as it’s competitors so it was a bit easier to swallow.

However, even though it’s a small fee, it’s a service that is woefully inadequate and it should not be charging anything for what it currently offers.

The Paywall for Cloud Saves

One of the most essential features you have to pay for with Switch Online is cloud save backups. This is one of Rich’s (ReviewTechUSA) favourite criticisms for the Switch Online, and it’s hard to disagree with him.

Microsoft lets you back up your data for free, and even though Sony charges for it, they at least let you backup your data to a hard drive.
However, Sony and Microsoft can get away paywalling cloud saves more easily since the Xbox One and the PS4 are home consoles, whereas the Switch is a portable console hybrid, meaning it is much more prone to breakage and loss.
That issue further exemplifies the necessity and value for cloud saving your data for the Nintendo Switch.

And the best part? It’s only supported for certain games.

It’s pretty simple: Make cloud saves free!
Even if Nintendo wants to charge for it, at least let people back up their data to external storage instead of having to pay Nintendo like some kind of crime boss for “insurance”.

If they must really charge for cloud saves, then give a limited amount of save storage for free and charge for unlimited storage once users hit their threshold. 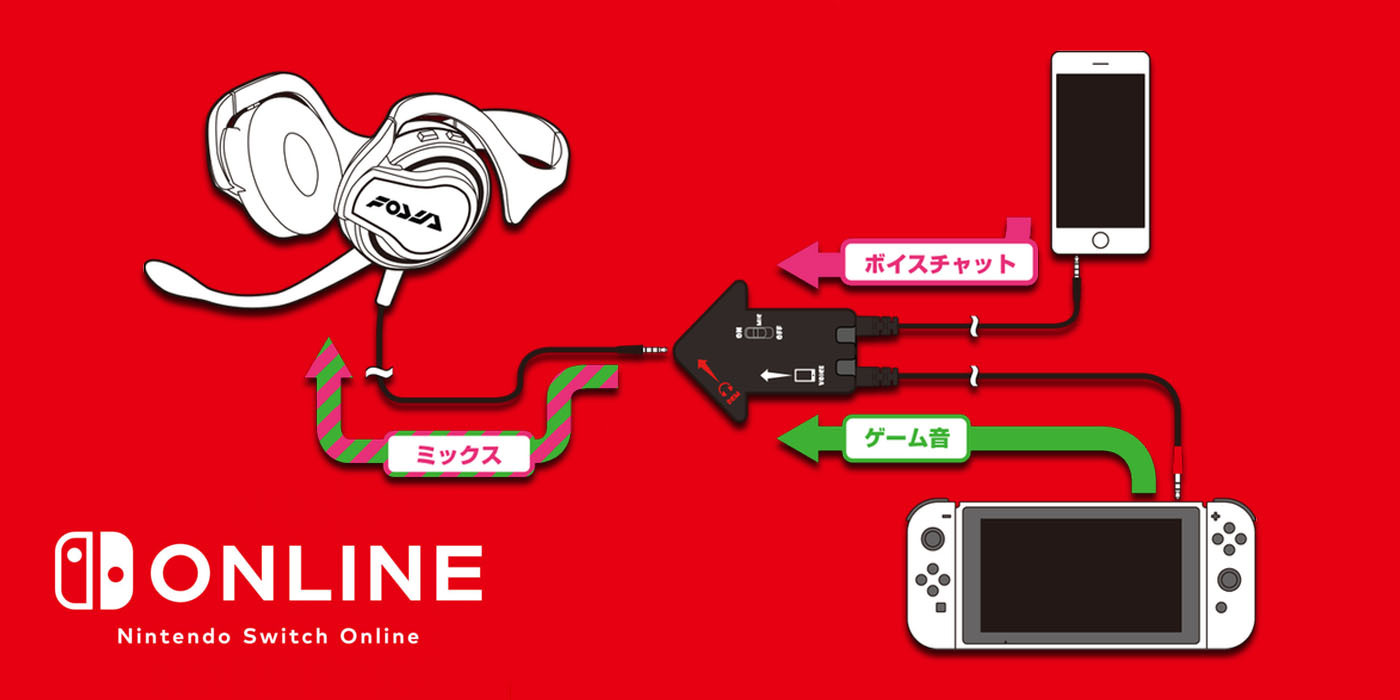 I’m sure many of you have heard about the disaster that is the voice chat feature for the Nintendo Switch. If there was any company that would mess up something as simple as voice chat, you can be sure Nintendo would be the one to do it.
Answer me this: Why in 2019 do I need to use an app on my phone to access something as basic as voice chat for a console?
I am literally dumbfounded by how anyone in Nintendo’s departments could even remotely agree that this was an ideal situation.
There is no excuse. Including:

It isn’t Nintendo’s responsible to parent other people’s kids for them. And more importantly, the 10 million Switch Online users don’t deserve to suffer as a result.
On the upside, at least Vivox made a solution for third-party developers, as they did with Fortnite.

Integrate Vivox’s SDK into the Switch with an update or make something within your software department so game developers don’t have to use a workaround for your own console.

At the same time, make the Switch Online app more feature rich. I’m not asking for you to go all out by mimicking Sony’s PS4 app right away, but at the very least, let people use the eShop to buy games from their phones.

I don’t even know why someone has to tell a company as big as Nintendo this. Having a proper smartphone app will increase long-term engagement with their products due to people continuously carrying their smart devices.

Out of all the problems I’m going to list, this one is by far the most insulting and it genuinely makes me feel sorry for Switch Online users.
Microsoft and Sony give you free, modern AAA games every month for being an active subscriber of their online service. For example, Sony gave out The Surge and Conan Exiles for “free” last month.

Now you have to admit that that makes paying for online features less of a burden. And for $10 a month, that seems pretty reasonable. I would say you’re definitely getting your money’s worth.

But what does Nintendo give you? NES games. (－‸ლ) . Games from a 30-year-old console that only true diehard fans would take the time to play.
Ya know, there’s only so much “nostalgia” can do for you.
Even if they were spoonfeeding it to you like they are now with their NES games, it would have been more forgivable if these were Gamecube or Wii games, as Nintendo has a phenomenal library of titles that they can offer to users.
It would also help people to find games they missed during those eras.
If you ask me, this tells me a lot about what Nintendo thinks of their fans. Maybe Jim Sterling was onto something when he said it was morally okay to pirate Nintendo’s games.

Nintendo needs to give users free games that they actually want to play, whether it be modern AAA or indie games.

Here’s an even better solution: Give users a Netflix-like catalogue of virtual console games!

Do you know how many classic first-party titles Nintendo is sitting on right now? Imagine having monthly access to hundreds of Nintendo’s games from the NES to Wii U era. This alone would make Switch Online extremely valuable!
I really don’t understand why Nintendo is leaving that kind of revenue on the table. They can increase the subscription fee if they need to as well with something like this as Sony and Microsoft don’t have the abundance of first party titles that Nintendo has.

I’m looking at the PlayStation Plus discounts right now and I’m seeing very enticing deals for up to 90% on games for active PlayStation Plus subscribers. Xbox Live Gold unsurprisingly has very similar offerings as well.
Now I bet you’re just dying to hear what Nintendo has to offer, right?
Hahaha. Sigh.
Nintendo’s best offerings are:

Ya know, the sad thing is that even if Nintendo adds game discounts to Switch Online, it’s probably only going to be something like 20% or 15% for their first party titles, as Nintendo is notorious for never discounting their games.
You can give Nintendo a bit of credit since their games are usually high quality, but so are Sony’s first party games, and you don’t see them selling God of War for $60 a year after it released.

Switch Online users at least deserve to be rewarded with discounts for being active subscribers to Nintendo’s anaemic online program.
I’m not talking about paltry 10% discounts. These discounts should be as high as 85% off on games.
If Nintendo doesn’t want to discount its games, then fine. But at least give third-party developers an option to discount their games exclusively for Switch Online subscribers.
Do you all remember Club Nintendo? It had its problems, but at least you got a few nice games and merchandise.
Even if Nintendo doesn’t want to give its users free merchandise, at the very least give users the option to buy reasonably priced and enticing merchandise, along with game content offerings.

Nintendo has never been good when it comes to online functionality when compared to its competitors.
Ever since the Wii U era, I admittingly haven’t been much of a fan of Nintendo, mostly because I can no longer tolerate their anti-consumer practices. Whether it was copyrighting YouTube videos or taking down fan projects, what Nintendo did never sat well with me.
So at the very least, I believe Nintendo deserves to make things better for its Switch Online users, and I don’t think anyone can disagree that it desperately needs a  makeover.
Nintendo has gotten too laid back with their fans. They know that they can sell just about anything and their hardcore fans will buy it and accept it without a second thought. This needs to change, and I am pleased that people are finally showing their discontent to Nintendo.
I really hope the Switch Online service shapes up to be something appealing and exciting in the nearby future.
FacebookTweetPin
Loading Likes... Tagged cloud saves, discounts, Gaming, gaming news 2019, NES, Nintendo, Nintendo Switch, Nintendo Switch Online, nintendo voice chat, online service, Playstation, Playstation 4, Playstation Plus, psn, Switch Online, switch online app, Xbox Live Gold, Xbox One