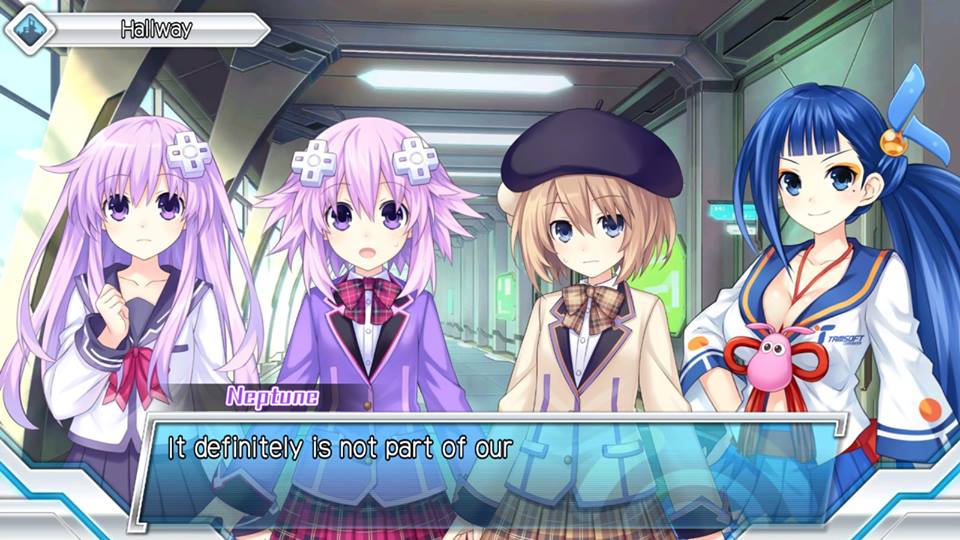 Does Tamsoft’s boobs really need to be that big?

I’ve honestly never liked the turn-based JRPG gameplay of the main Hyperdimension Neptunia game series. Is it because I suck at turn-based RPGs?

I bought the first game, Hyperdimension Neptunia Re;Birth1, on steam years ago and I’ve only made minimum progress since starting it all that time ago.

But enough about that, we’re here to talk about MegaTagmension Blanc + Neptune Vs Zombies!

I’ve been meaning to buy this game for a long time now. I love a good hack-n-slash game, so when I found out that Hyperdimension Neptunia had an action RPG spin-off series, I was totally onboard.

I initially had the first one, Hyperdimension Neptunia U: Action Unleashed, on my wishlist. Since MegaTagmension was the more recent one, I went for that instead.

I can confidently say that MegaTagmension Blanc + Neptune Vs Zombies is one of my more favourite hack and slash games, but it doesn’t come without its hindrances.

If you’re looking for a game with a serious storyline, this isn’t the game for you, unfortunately. What MegaTagmension offers is a very light-hearted and humorous story experience that doesn’t take itself seriously at all. But I’m sure the crazy title of the game already kinda gave that away.

However, if you think this is worth a skip just because of its zombie plot, you’ll be deeply mistaken. Instead of being your typical zombie shooter, the protagonist of MegaTagmenion Blanc + Neptune Vs Zombies (god, that is a mouth full even to type), Blanc, is tasked with the objective of making a zombie movie. And it goes about as well as you would expect it to.

The dialogue is full of humour and fourth wall breaks which makes the game’s silly story all the more entertaining.

Sure maybe a little bit on the cringe side in a few parts of the game, but those are far and few between in what is an overall likeable voice acting performance. If you’re like me I don’t like having to read subtitles, I believe you’ll love the voice actor’s efforts.

I would say my biggest criticism of the story is that it is a tad bit on the short side, being able to complete it within 8-9 hours on a normal playthrough, but that’s no big deal to me as I suspected as much when buying it.

Personally, I found the combat of the game really enjoyable and fun. Taking out crowds of enemies “Dynasty Warriors style” while playing through the game’s quirky plot makes for an entertaining play through.

However, if I have to be more critical, I would say the gameplay is more “hit-and-miss” most of the time.

While it is easy to learn how combat works, it gets tricky learning how to play competently. I found pulling off special combo attacks challenging, and it doesn’t help that the game throws so many enemies at you that you don’t get time to ease yourself into learning the different attacks you can use.

The reason this is so is because the game throws a lot of mechanics at you without gradually adapting you to them. It can leave you quite overwhelmed as you try to figure out how to work what.

Sometimes the game feels like simple button mashing, but once higher level enemies start to appear, you’ll notice the gameplay gets deeper than what it initially appeared to be. You have to think about how to approach certain enemies, especially bosses. Just rushing in will get you killed so you have to be a little tactical in your approach. Like avoiding combat to recover or taking down one boss at a time so you don’t get overwhelmed.

This is where I will criticise the game for lacking a difficulty adjuster. For more of the hardcore gamers out there, they will find it pretty easy to play through, whereas some of the more casual gamers, especially those new to this type of game, may find it a little on the challenging side.

I wish they at least let you use three characters instead of just two. You’re definitely going to have more than three characters you’ll like to play as, so I find it very limiting that you can only use two at a time.

I feel a little indifferent about the game having a levelling system. I understand why it is there, to give you an RPG-esque experience where you learn new skills and unlock abilities as you go, but the levelling system makes it harder for you to try other characters on newer levels. It’s pretty annoying if you don’t want to bother grinding.

For a game that has pretty fun long distance combat, it is a huge shame that Uni is really the only character that is truly long distance, with her rifles. I probably would have still gone with my team of Nepgear and Uni to play through the game (I ship them so hard lol), but it’s still disappointing nonetheless.

However, the gameplay would have benefited greatly if you could aim the gun like a first-person shooter. I understand it could have required a bit more resources since Uni is the only character their that utilises a gun, and reworking the game for that one character would have been asking a bit too much.

And why isn’t there something like a horde mode or arena side game?! That is such a wasted opportunity.

Something like Devil May Cry’s Bloody Palace would have added exceptional replayability to the game and I’m pretty sore about it because as I’ve mentioned before, I really like MegaTagmension’s combat.

Lastly, what is with the bizarre feature of not pausing the game with the START button? To pause the game, you have to enter the menu while the game is still active and then select pause. The last time I played a game that did that was Monster Hunter 3 Ultimate and it was majorly annoying because when I tried to pause the game, some monster was there to annihilate me on the spot.

The game is fun to play, no doubt about that, but learning the game’s controls can get a little complicated as you try to understand the button layout. It takes some time, but still acceptable.

What really grinds my gears is that this is another hack-n-slash game that lacks mouse support! Like seriously?! Why is this still an issue? Don’t developers understand that using the left mouse button is pretty good for attacking, and the additional mouse buttons make activating skills a breeze?

Besides normal gameplay settings, the only thing you can change regarding the graphics is the window mode and resolution you’re playing at.

What really annoys me is the antialiasing of the game. On whatever default settings it is on, I can still see the character outlines not being as smooth as they should. It shouldn’t be that way at all, and it’s rather baffling that they don’t give you any options for stronger, or even weaker, computers.

The anime style is fine, it’s colourful even, but it’s just so generic. You can see that kind of style in a billion other anime games, so in terms of art style, it doesn’t get any extra points from me.

MegaTagmension has a bug that makes the FPS of the entire game drop to near unplayability when in fullscreen mode. I don’t know how this hasn’t been fixed yet considering this game is two years old. but the developers certainly don’t seem to care.

MegaTagmension Blanc + Neptune Vs Zombies is a really entertaining hack-n-slash game that knows how to have fun and not take itself too seriously, in addition to giving you some fanservice. However, it’s such a shame that there wasn’t a greater effort to iron out some of the annoyances that stop it from being a better experience.

Whether it’s the graphics or style of play, you’re going to feel like you’re not experiencing the game at it’s best, but if you’re a fan of the series or a fan of hack n slash games in general, that doesn’t stop it from being an enjoyable gameplay experience.